How Much Junk Wax is Still Around?

I'm a curious sort. I wonder about things. It's part of my charm. I'm the guy who looks at a T206 card and wonders, “why is that still around?” What about this one particular card saved it from the landfill. Or the mouse nest. Was it hidden in a book? Was it lost in the bottom of a drawer in the attic? How 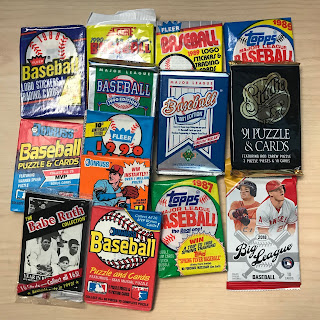 did it make it through 100 spring cleanings? No mom threw it out. How did that happen?


The same thing happens with newer things too. When Santa brought me those two junk wax boxes of 1988 and 1990 Fleer, I couldn't help but wonder how those survived. They weren't valuable as a box. Not worth keeping in a safe place. Why wasn't it opened in 1988? Or 1991? Or any of the other 30 years since it was released? And, if it wasn't opened, why wasn't it thrown out? Sure, maybe you kept them as “investments” for a little but. But, by 2000, didn't we know they were worthless? Where were worthless packs kept the last fifteen years? Why?


It was an interesting wonderment, until I recently opened the repack blaster not long ago.


Then, people commented that they had gotten the same thing in their boxes. Then, more people. So, there’s on thing that was perfectly clear.


THERE IS A TON OF UNOPENED JUNK WAX OUT THERE!


Like, where is it? Where had is been? Who has been storing warehouses of unopened 1987 Topps wax boxes?


One or two boxes on eBay, I can almost understand. A couple boxes stuck in the back of a closet sit unnoticed until the kid comes back to his parent’s house and realizes he doesn’t want them anymore.


Who is renting out the storage space needed to house that many boxes of wax? Who decided it was worth keeping for 30 years? Why hasn’t it been clearanced? Or given away? Or thrown out? Or donated? Why has it been?


Or, are there just that many individual people holding onto the boxes, that with some effort the repack company could accumulate as many as they need?


Does anyone have boxes of junk wax they’ve been storing since 1989? Does anyone know of anyone with boxes of 1988 wax boxes? My brother has a few packs of 1991 Bowman that he’s hung onto never opened. But, that’s like five packs. Not a box. And not nearly enough to sell nationwide. So, where are they getting the packs?


Was it from you?
Posted by Section 36 at 6:39 PM
Email ThisBlogThis!Share to TwitterShare to FacebookShare to Pinterest