Section 36 has a new visitor! The first visitor from the state of Kansas, Sierra Bonn is a talented violinist, a STEAM advocate, and 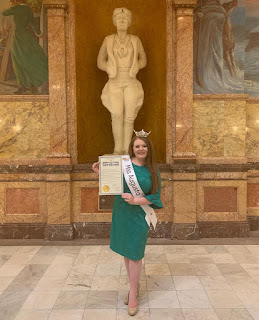 the current Miss Augusta. I'm glad we were able to find some time for her visit with us to discuss those topics, and a few more. I hope you enjoy what she had to say!

So, lets see what happens when Sierra Bonn visits Section 36!

How did you celebrate winning the Miss Augusta crown?


Immediately after the pageant, I went straight to a restaurant to get some much needed carbs — I love French fries. My mom (aka, my ultimate pageant supporter) and I then pulled out our planners and started getting to work, figuring out exactly how I’d like to spend my time as Miss Augusta!

Is there a specific goal you’d like to accomplish during your time as Miss Augusta?
I run an initiative called “Let’s Go Full STEAM Ahead!” which promotes science, technology, engineering, arts, and mathematics education and engagement to empower young women to see their potential to thrive in STEAM careers. One facet of that education is to show young women the incredible and inspiring women who have come before them and paved the way in STEAM fields. I’m very fortunate to have accomplished one of my larger goals just last week — I worked with Kansas Governor Laura Kelly and her office to officially proclaim and institute a Women in STEAM week, a celebration to highlight women throughout history, and to provide them as role models for future generations. The next goal is to get funding for teachers across the state to have resources to celebrate this new holiday!

What portion of the upcoming Miss Kansas competition are you most nervous about?
This is probably cheesy, but something that has been on my mind throughout my time as Miss Augusta is how much I want to make Augusta proud. This year is Augusta’s 150th birthday, and it has been a huge honor to represent the community for such a monumental anniversary. Being able to learn about the people of Augusta, both of the past and the present, I’ve come to understand how hardworking, kind, resilient, and supportive the community is. It’s a small community, but a strong one. I want to make sure I represent them well on the Miss Kansas stage.

How did you select your platform, “Let’s Go Full STEAM Ahead”?

Women make up around one fifth of the workers employed in science, technology, and engineering jobs, according to the Bureau of Labor Statistics — and for women of color, that percentage is even smaller. In order to grow the trend of women in STEAM fields, girls must be encouraged at a young age that they are capable of accomplishing incredible engineering feats and scientific discoveries. “Let’s Go Full STEAM Ahead!” was created as a way to impact girls across the country and to empower them to make the world a better place by contributing their skills and talents. I needed a role model when I was younger, and by promoting this program through the Miss America Organization, it gives me the platform to serve as a role model for aspiring scientists, engineers, and artists.

As a talented violinist, what’s your favorite part about performing on stage?
STEAM education focuses on science, technology, engineering, the arts, and math. Without the creativity and passion that the arts bring to the equation, students of STEAM would lack crucial collaboration skills, critical thinking skills, communication skills and empathy. I’ve played the violin for 12 years, and in that time I’ve learned how math and music intersect when counting time, how the science of sound is translated to the audience, how technological advancements in the way a violin is engineered affects the tone and pitch. The Arts and the Sciences should not be seen at odds, pitted against each other — they are infinitely and intrinsically related, which is why I love having the opportunity to not only promote my social impact statement on stage, but also to express myself creatively.

You were recently able to travel to Boston, not far from Fenway. What was the trip like?
Yes! I had never been to Boston before this trip, but I’ve fallen in love and don’t want to leave. I got to walk all over the Back Bay 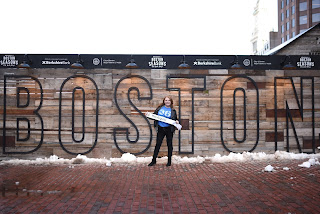 and saw some neat historical landmarks, and I ate an obnoxious amount of food. I think my favorite part might have been Quincy Marketplace, where I had some delicious clam chowder in a bread bowl (told you, I love carbs), and got to listen to some talented performers while I just chilled out and met some very kind and friendly Bostonians.

I came to attend the ACPA Conference for student affairs and higher education. For the first few years of college, I had worked at Wichita State University’s Office of First-Year Programs, where we focused on orientation, transition, and retention. I had a terrible transition to college, and I know that without the support I received from student affairs professionals, I probably would not have continued with my education -- I am eternally grateful for them. Someday, I’d like to return to higher education as an Engineering Educator, helping future generations of engineering students receive the support and resources they need to be successful.

Which Marvel Character would you say is most like you?
*Black Sabbath plays in the distance* I am Iron Man. As a biomedical engineer, I fangirled so hard when I realized that the Iron Man suits are just advanced prosthesis. I love wearable technologies, one of my career goals is to run a non-profit to provide low-cost medical technologies for underserved areas, and I would love to build the Iron Man suit one day! In fact, my sorority sisters at WSU voted me most likely to become Iron (Wo)Man… two years in a row. My love for wearable technologies and biomedical engineering could provide you a whole separate interview on it’s own!

As a KC Royals fan, who is your favorite Red Sox player? Why?
Mookie Betts is an interesting character, he’s garnered some pretty great accolades, but I think I like him because he’s also a bowler! Wichita State University has an awesome bowling team — a few of my friends make up the bowling squad and I also bowled in high school (very terribly, for the record). I think it’s neat that he has many different interests and talents, especially being skilled in two very different sports.

If you had two tickets to see the Red Sox play the Royals in Fenway Park, who would you take with you?
My dad, definitely! Last time I went to a Royals game, he wasn’t able to join me because he was undergoing the final stages of cancer treatment. Now that he’s back in “fighting shape,” it would be an honor to hang out, eat hotdogs, and watch our buddy Whit play.

That is a wonderful answer!

As usual, I want to thank to Sierra for doing this interview, and for sending along some wonderful pictures.  It was so amazing of her to bring her Section 36 shirt with her on her Boston trip for those great pictures. (and thanks to Rodrigo Larioss for taking those shots!) I also certainly want to wish her the best of luck as she competes for the Miss Kansas. Hopefully she'll be the first Section 36 visitor to wear that crown!

As Sierra continues her time as Miss Augusta, be sure to check out her official Miss Augusta Facebook page to keep up to date. You should also check out her platform's Full STEAM Ahead website. There's a lot of great information there about how STEAM should play an important role in our schools.