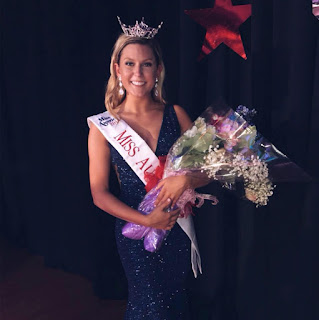 Section 36 has a new visitor! Emma Colen is a talented dancer, a Red Sox fan, and the current Miss Auburn. I'm so pleased we were finally able to find some time for her visit with us to discuss those topics, and a few more. I hope you enjoy what she had to say!

So, lets see what happens when Emma Colen visits Section 36!

How did you celebrate winning the Miss Auburn crown?


I actually already had plans to go visit my family down in Cape Cod for a week so when my mom and I did get down there, we had some snacks and watched a movie! It was a very chill night but then we spent the whole next day on the beach and ate lunch at my favorite restaurant, Arnold's!

Is there a specific goal you’d like to accomplish before your time as Miss Auburn ends? 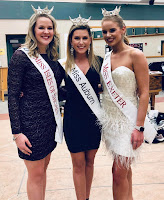 What did you learn about yourself at the Miss Auburn competition that will help you at Miss New Hampshire in the spring?
One thing I learned about myself at the Miss Auburn competition was that I have the most fun and perform the best when I don’t try and hold myself to any standards, but instead just relax as much as I can and put my best foot forward.

How did you select your platform, “REP Spinal Cord Injuries: Rehabilitation, Education, and Prevention”?
I chose my platform after I fractured my lower back. I was in 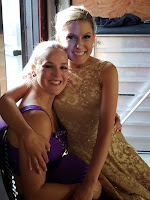 physical therapy to regain strength in my core to prevent further issues and pain in my back and was then introduced to Project Walk Boston in Stratham, New Hampshire. I began volunteering and knew at that moment that I wanted to bring awareness to spinal cord injuries of every type. After doing a lot of research, I learned that on average of 12,500 people a year in the U.S. suffers from a spinal cord injury with a majority of those being from preventable causes. I have now made it my mission to spread prevention of spinal cord injuries through education and still volunteer to rehabilitate those who are already suffering from spinal cord injuries.


As a talented dancer, what’s your favorite part about performing on stage?
My favorite part of being a dancer is striving to make the audience

You’re a freshman in the University of New Hampshire nursing program. What drew you to that field?
For a while, I actually wanted to be a Physical Therapist, but when my stepsister came into my life, she was a role model for me since the day I met her. When she became a successful nurse and told me

stories of what she did, I realized that nursing was what I actually wanted to pursue. Being a student dance teacher I also knew I wanted to work with children, so at this moment I am hoping to become a Pediatric Nurse when I graduate!

Who’s your favorite current Red Sox player? Why?
Mookie Betts for sure. Being the AL MVP and an incredible bowler how could he not be my favorite?

Is there a feature/aspect of a Red Sox game at Fenway you would most like to experience?
I’ve been lucky enough to attend many Red Sox games in my life and have even sat on the Green Monster for a game, but one of my life long goals is to throw the first pitch at a Red Sox game!

What were you doing when the Red Sox won the 2018 World Series?
As lame as it may sound, I was studying for an exam during the World Series! I was with friends, so of course, we were multi-tasking, but I'm proud to report I got an A on the exam!

As always, I want to thank to Emma for doing this interview. I also want to thank her for sending along so many great pictures. I love the ones of her with other titleholders who have visited with us.  I also definitely want to wish her the best of luck as she competes for the Miss New Hampshire crown in a few weeks. Could former Section 36 visitors go back to back in winning that crown?

As Emma continues her time as Miss Auburn, I encourage you to follow her on her official Miss Auburn Facebook page. It’ll be worth your time!