Change for the Sake of Change

You're probably all well aware that Major League Baseball announced several rule changes for the upcoming seasons. Some make sense, some don't, and some are just plain odd. I don't know if there are any actual official explanations for these rules but I'd love to know the “fly on the wall” answer. 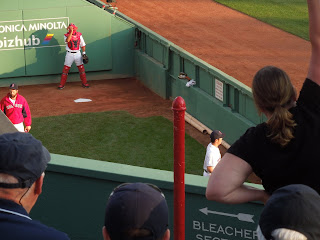 A few of the rules take place in time for the 2019 season.


They monkeyed around with the All-Star voting, which I should probably care about. The problem is, ever since Joe Torre ruined the game and selection process, and MLB decided to go along with it, the selection to an all-star game has become practically meaningless. So it's certainly not something to worry about now. Until MLB follows my plan, it'll always be a waste of time to try and worry about selections.


I care even less about the home run derby format. Unless they're planning on opening it up to non-all-stars, which I'd be in complete favor of. Otherwise, it's just an exhibition so I don't care what the rules are.


I'm fully on board with the “pace of play” rules for 2019. Limiting the number of mound visits is wonderful. Five still seems like a lot in a nine inning game, but it's better than six. Frankly, I'm ok if they limit it to “0”. I am also 136% on board with cutting the time between innings. It's the biggest contributor to the increased length of games, and it was the one I never thought they'd fix. So, I'm astonished and thrilled that they actually did it.


So going into this season, I’m all in on the changes.


Increasing the roster size to 26 is fine. My only problem with it is it means another player a manager needs to keep fresh. If you need to sit Mookie more often because Blake Swihart hasn't played in two weeks, that's not good. But, if it ends up meaning that Mookie rests a tender ankle an extra day because they don't need to IL him thanks to an extra bench player, I'm good with that.


The reduction in September roster size is fantastic. Again, having all those players in the dugout needing playing time can get annoying. The only downfall would be having to play stars more in September as opposed to resting them on that final weekend and playing the cup of coffee players. Which might actually be the point.


Limiting the number of pitchers on a roster, and limiting position player pitching just seems odd to me. Who cares? What was the downside to a second baseman throwing an inning? Was the the union worrying about a Jose Canseco injury when a team makes a player do something they’re not accustomed to? Or, was MLB worried about using position players to get around some other rule? If a pitcher is in left field to start the inning, would that count as a pitching change if they brought him in to pitch? Could he just face the one batter if he wasn't new to the game?


Because the biggest proposed change seems to be forcing a reliever to face a minimum of three batters before being removed mid inning. I'm probably supposed to be all up in arms about this.  But I'm honestly having trouble seeing the arguments. I will firmly come down on the side of not fixing what isn't broken. I will also come out against changing things that won't fix a problem. So, I should probably hate this rule because of those reasons. This will not speed up the pace of play. Certainly not as much as shortening the time between innings will. Because, how often is a reliever pulled mid inning before facing three batters? No idea. But, I looked at my most recent scorebook. I scored fifteen games in it. This rule would have come into effect in three of the games, a total of four times. So, if those changes added three minutes each, that would mean twelve minutes of added time to those fifteen games. So, 48 seconds per game. That's what it takes to make a rule change? (Even in the individual game where it happened twice, I have a hard time imagining that the entrance six minutes was making me have a terrible time at the game.) I'm not sure that's worth changing strategy.


Because, it will change strategy. Any time you limit what a manager can do, you limit strategy. But, really, won't this also add strategy? Honestly, is there an easier call for a manager to make than “a lefty is up. Bring in my lefty specialist”? No. Any fool can make that call. Reminds me of the people who hate the DH because a manager has to strategize a pitcher bunting every time he's up. It's probably more strategy to say “ there's a lefty followed by two righties...do I still bring in a lefty specialist?” Which actually brings up the real problem with the rule. No matter what call the manager makes, the chances of batters getting hits increases. There is nothing that prolongs a game more than batters getting hits. So, really, any time savings from not having a pitching change will be lost to the additional base runners. Which brings us back to changing a rule for no reason.


So that's my one gripe. There's nothing wrong with the rule either way it's written. But changing something to fix a problem when the change won't fix the problem is never a good idea.


Hope Major League Baseball is prepared for that.

Posted by Section 36 at 3:29 PM
Email ThisBlogThis!Share to TwitterShare to FacebookShare to Pinterest