I caught myself doing it again. When Mike Trout’s mammoth extension was announced, like most of us I wondered what that 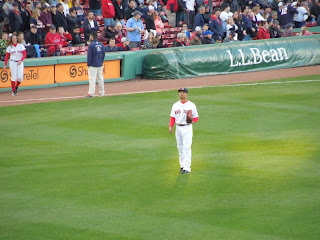 might mean for Mookie. My thoughts wandered until I came up with a choice. Give Mookie his $400 million deal, or give Xander $150 million, and Sale $100 million, and Benintendi $100 million. I bounced that around in my head for a while until it hit me. They're doing it to me again.

Why do I have to choose?

There's no salary cap in Major League Baseball. The Red Sox can spend as much as they'd like. There's nothing stopping them from giving out all the contracts I wondered about, and more.

But, that really means one thing. I'm expecting John Henry not to make any money. Or, even to lose money on the Red Sox.

I admit, growing up I always assumed it was the latter. When I used to dream about winning the lottery, I'd sometimes consider using my winnings to buy a small stake in the Sox...if that sort of thing was even possible. When I took that fantasy further, I would sometimes wonder if they would allow a one-time investment like that. After all, I wouldn't be able to continue spending money to support the team. Because, in my head that's how it worked. You buy a year, and every year the money for salaries came out of your pocket. It was a hobby. Like buying baseball cards or autographed memorabilia. It never occurred to me that an owner would be turning a profit from it. When Disney bought the Angels, I assumed it was as a bookkeeping “loss” for tax purposes. I never considered it a business investment. Sure, Disney was in a rare position to capitalize on the secondary merchandising aspects of the team. But I assumed the day to day baseball operations were a losing venture.

Maybe that's the way it used to be? Maybe Tom Yawkey or George Steinbrenner bought their teams for fun. Maybe they were hoping to break even, at best. Maybe that's how that assumption got into my head.

But, I don't imagine it actually that way any more...if it ever was. I think owners consider the Red Sox a business like any other. You can either build a blogging empire, or a baseball one. It's really just a different business.

So, is John Henry allowed to make money at this business?

I know. I know. “They got you again, defending cheap ownership!” But, I’m actually trying to work it out in my head. Is he allowed a profit? The other partners? So, when they raise ticket prices, but don't then sign Bryce Harper, is that OK? How much can they raise them and have it be OK? Anything they want as long as they're World Series Champs?

Because I honestly keep going back and forth. On the one hand, I can't even imagine the costs involved in running a baseball team beyond the roster payroll. So, I don't even know how much of a ticket increase is even available for players. So, I tend to believe the Sox when they say they have constraints. I think I've decided I don't expect John Henry to slowly dwindle his bank account for each signing. But, I also don't want the Sox making 100% profit on every ticket sold or advertisement hung. There's a limit that I'd hope for.

And hopefully that limit allows them to sign everyone they need.

What would your limit be?
Posted by Section 36 at 5:44 PM
Email ThisBlogThis!Share to TwitterShare to FacebookShare to Pinterest