Section 36 has a new visitor! Olivia Fonseca is a talented singer, a Red Sox fan, and the current Miss Greater Plaistow. I'm so 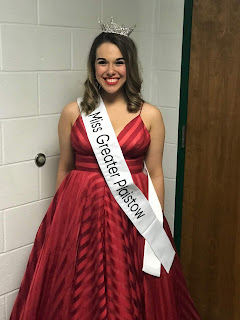 excited she was willing to visit with us to discuss those topics, and a few more. I hope you enjoy what she had to say!
So, lets see what happens when Olivia Fonseca visits Section 36!

How did you celebrate winning the Miss Greater Plaistow crown?
After my crowning I went out to eat with my family, my new director, my teen and my new sister queen, Miss Granite State, Alexa. After that I went home and barely slept because I was just so excited!

Is there a specific goal you’d like to accomplish before your time as Miss Greater Plaistow ends?
I have a few to be honest. One is to do as much community service as possible. Community service is something I have always loved doing and now having an even bigger platform to do it on is amazing. I also really want to take my year to spread my platform, Buckle Up: Promoting Seat Belt Safety. Taking those 4 seconds to buckle up could truly save a life and I want to educate as many people as possible on the topic.

Which part the Miss New Hampshire competition makes you the most nervous?
Oh gosh! As a first time competitor it honestly all is a little nerve wracking. I would have to say I’m probably most nervous about interview. Although it is so fun getting to share your personality and opinions with the judges, I'm sure there will be even harder questions at the state level so I’m a little nervous about that.

How did you select your platform, “Buckle Up: Promoting Seat Belt Safety”?
When I was a sophomore in high school I lost my best friend in a tragic motor vehicle accident and she wasn’t wearing her seat belt. Although authorities said the chances of her survival even wearing her seat belt would have been extremely slim, as the accident was extremely severe, there still was that slight glimmer of hope. Since then I have wanted to promote and educate the importance of taking those 4 seconds or less to buckle up because as small of an action as it may seem, it could truly save your life.

As a talented singer, what’s your favorite part about singing on stage?
I love the feeling of being onstage and getting to share my passion with all of those watching in the audience. There is no better feeling then waiting backstage before a performance and having those little butterflies then going onstage and nailing a performance. I always say the stage is where I feel most at home and getting to sing on it is just icing on-top of the cake.

Which role in a Broadway musical would you most want to play?
Okay this question is extremely tough! Right now I think I would have to say Anastasia in Anastasia. I saw the show in Hartford Connecticut when it was still in previews and I was blown away. It was one of my favorite movies as a child and having the opportunity to play such a strong and empowering female figure and share such a wonderful and meaningful story, would be a dream come true.

Who’s your favorite current Red Sox player? Why?
I would have to say Mookie Betts. Aside from having a super cool name he has accomplished so much in his career in such a short amount of time and I think his work ethic and positive attitude is truly admirable. Mookie is also one of my nana’s favorite players and she’s the biggest Red Sox fan ever so that’s also a very important factor haha.

Is there a feature/aspect of a Red Sox game at Fenway you would most like to experience?
Getting to sit and watch a game from the Green Monster would be an absolutely life changing experience! I went on a field trip to Fenway park when I was in elementary school, as I’m a Massachusetts native, and I remember standing on the Green Monster overlooking the stadium at such a young age, getting to do it again now would be so cool.

What were you doing when the Red Sox won the 2018 World Series?
Celebrating with all my friends at school! We watched the game together in the lounge of my dorm and as soon as the Red Sox won the whole dorm just erupted in screams of excitement, it was such a fun night.

As always, I want to thank to Olivia for doing this interview, and for sending along that great picture that leads things off.  I also certainly want to wish her the best of luck as she competes for the Miss New Hampshire crown in a few weeks. Hopefully former Section 36 visitors go back to back in winning that crown?