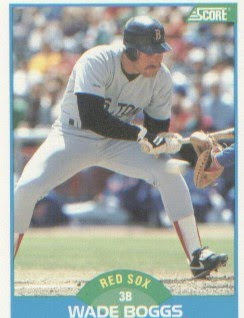 Best Picture: Wade Boggs. This is a great shot to show to kids. Future Hall-of-Famer Wade Boggs is letting a pitch go by that he doesn’t like. But, he’s still paying attention. His eyes are locked onto the ball, even as it is only inches from the catcher’s mitt. It’s almost like he still might decide to take a hack at it. I wonder if it was a strike.
Hall of Famers: Wade Boggs, Jim Rice
Future Hall of Famers: Roger Clemens
Reason to Buy the Set: There’s not a lot going on here. Once again, the two Hall-of-Famers are the main draw.
Overall Reaction: I like the design of the set. The baseball diamond on the bottom makes for a clever frame around the basic information. This was the second year that Score released a baseball card set, and they were doing a pretty good job. While there’s nothing about the ’89 team itself that draws me in, this is a nice set to have in a collection, even if it is the definition of “eh.”
Posted by Section 36 at 1:36 PM
Email ThisBlogThis!Share to TwitterShare to FacebookShare to Pinterest