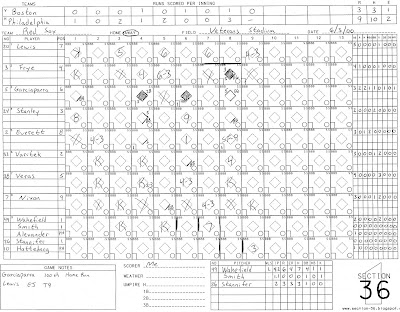 What might jump out at you as being a little different about this scorecard is up at the top. Sure, the team is listed as the Red Sox. But, “away” is circled, and the field is listed as Veterans Stadium. Yup. This game was in Philadelphia. It was my first chance to see the Red Sox on the road, which was pretty exciting. It also led to the disappointment I had with the “pitchers” box. While I was traveling, I didn’t have regular access to sports news. But, when I left home I knew that Pedro Martinez was scheduled to pitch. What could be better than seeing a guaranteed win in an away park? So as I filled out my scorecard, I happily listened as the PA announced the starting pitcher for the Red Sox. Number forty…nine? Wait. Pedro is forty-five! Yup. Pedro was hurt and had to miss the start. So, an automatic win became a question mark. Bummer.

Another interesting part of the card is in the notes section. Nomar Garciaparra hit his 100th career home run during the game. It’s always a little depressing when a player hits a minor milestone on the road. I’m sure he would have gotten a much bigger ovation back at Fenway.

One of my lasting memories from the game, other than how hard it was to find a cheese steak, was the t-shirt they were selling under the stands. The slogan was “Battle of the Rookies of the Year” and featured Nomar Garciaparra and Scott Rolen. They were, of course, their respective leagues ROY in 1997! So, three years later, that’s the best angle the t-shirt people could come up with. Looking at the Red Sox line-up, that’s not so surprising. It was pretty weak. So, it’s not surprising that they’d hype Nomar. Nor is it surprising that he went 2-3 and scored two runs. What’s more surprising is that he only had the one walk. Why pitch to him?

So, the Red Sox were pretty much shut-down. Their ace was injured. The fill-in wasn’t up to the task. The bottom four in the order went 0-14 with 9 K’s.

Posted by Section 36 at 1:36 PM
Email ThisBlogThis!Share to TwitterShare to FacebookShare to Pinterest
Labels: I Scored, Nomar Garciaparra