OK. I guess it’s ok that the Sox had to play the defending National League champs while the Yankees played the Mets. During a six game season series, the Phillies did their best to roll over so the Sox could rub their bellies. While I find it hard to believe that the Sox are as good as they looked, or that the Phillies are as bad as they looked, it was certainly a good weekend.

The biggest story to come out of the three games is the wonderful debut of Daniel Nava. Maybe you heard about it? His first at-bat is exactly why I think every player should swing at the first pitch they see in the major leagues. Nobody will remember if you fly out in your first at-bat. Nobody will remember if you go “2-unassisted”. But, if you homer on the first pitch you see? That’s where you go immortal. Every time another player makes his debut, they’ll mention your accomplishment. So, hack away. In this case, it was about as good as it gets. There is nothing more you can do after one pitch in the majors that is better than that. Part of me thinks he might as well have just retired right there. But, he didn’t, and went on to have a great weekend.

I noticed his parents in the stands. Maybe you saw that they had them on camera once or twice. There’s his dad taking home video. I know my dad always said he hated taking home movies since he felt like he was missing the action. It’s hard to savor the moment when you’re staring into a lens. So, I always wonder when I see famous people taking home movies. Wouldn’t it have made more sense to put the camera down, enjoy the moment, and ask Fox for a tape of the game later? I bet they did a pretty fair job of capturing the moment. I remember seeing Tiger Woods’ mom walking around with a video camera. I always wondered if she forgot there were about a million professional cameramen following Tiger as well. At least in her case, I’m sure she was getting some unique shots. Tiger behind the rope line. Tiger chatting in the crowd. All Nava’s dad got was choppy footage from a side angle. Odd.

The games on Friday and Saturday reminded me of the good old days. The Sox of ’04 would kill pitchers like that. If there was a veteran pitcher without overpowering stuff, you felt good about their chances. With as much film as they must have on Jamie Moyer, how could the Sox not do well? It’s like the Patriots against Peyton Manning. When the guy throws a million touchdowns, there’s plenty of tape to study of him throwing touchdowns.

I guess that probably doesn’t apply to Tim Wakefield though. After 3000 career innings, there’s still probably not enough tape to figure out a knuckleball. (It must be the extra thousand innings on tape that helped the Sox with Moyer.) Congratulations to Wake on reaching another career milestone.

With Matsuzaka going on the DL, it makes Wakefield even more important. They need as many arms as they can get right now. It makes me wonder though. The Sox are staying pretty close to the division leaders at the moment. Have they ever had their starting 9-main line-up along with their 5-man rotation at the same time? What will happen if they’re ever at full strength? 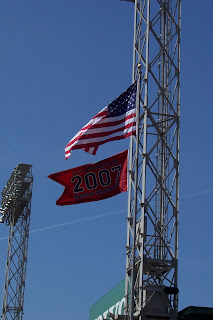 Happy Flag Day everybody!
Posted by Section 36 at 5:36 PM
Email ThisBlogThis!Share to TwitterShare to FacebookShare to Pinterest