Especially if, as I do, you consider a success anything better than being completely ignored. In this case, I had two wonderful responses on the very same day.


These were new response forms for me. I have been sending letters to Red Sox players for quite some time, and never had this. It wasn’t enclosed in the SASE I sent, which is usually the way I know I got a response. In this case, it was in a Red Sox envelope. I looked at them and wondered…why are the Red Sox sending me a letter? Why are they sending me two?

They were responses to my requests from Tim Wakefield and Jonathan Papelbon. When I sent out the request, I mentioned that I didn’t expect Wakefield to respond. I had heard he only signs for charity. So, I was really only hoping for a form letter telling me how to do that. Papelbon was also risky. As an elite player in the league, I figured he got his fair share of fan mail. So, the chances of being lost in the shuffle were pretty high. What I think is most interesting about the letters is how they are different, in spite of being so alike. 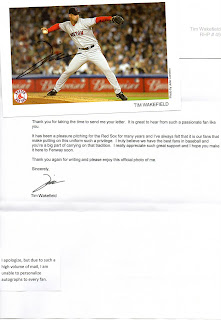 Starting with the Wakefield letter, it was very well written. He thanked me, and explained the situation. He enclosed the team issued picture, which is great. It even has a facsimile autograph on it so it will display nicely. Wake was kind enough to include the extra note saying he was sorry, but was too busy to personally respond. He even went so far as to send my card back. (Unlike Youkilis and Francona, it even appeared to be the same card I sent him.) It was really a fantastic response. 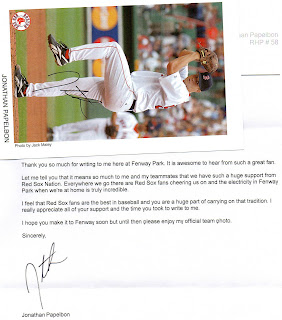 The Papelbon letter is also a great one. It’s even worded differently than Wake’s version. Wouldn’t you imagine that Pap and Wake would use slightly different vocabulary? He also included the great team issued photo in the letter. Papelbon didn’t return my card, but that’s OK. It’s a great response as it is.


But, once again, a response from a Red Sox player has left me with questions. How does this all work? From what I remember, I didn’t send the Wakefield and Papelbon requests on the same day, but they were returned to me at the same time. The letters themselves are interesting. They both have the same basic format and paragraph structure. That would certainly imply that the players didn’t sit down and write them out themselves. Did they have any part in it? Were they given a mad lib? “Dear Fan, Thank you for the letter it was (adjective).” Were they interviewed, and a staff writer put it into a letter? Did some flunkey write the whole thing, but know that Papelbon would say “awesome” but Wakefield wouldn’t? Fascinating.


Despite the questions, or maybe because of them, I couldn’t be happier with the responses. I certainly want to thank Tim Wakefield and Jonathan Papelbon for whatever role they played. I also need to thank the Red Sox organization. It’s this sort of fan respect that makes them so classy. They provided paper, an envelope, postage, and a picture just to respond to someone bugging one of the players. Pretty cool.