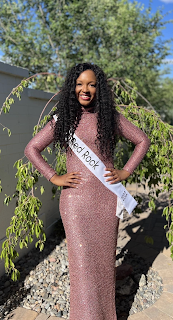 Section 36 had another visitor! Alexia Roberts is passionate about ending human trafficking, a talented performing artist, and the current Miss Red Rock. I was so excited that she wanted to visit with us to discuss those topics, and a few more.
So, let's see what happens when Alexia Roberts visits Section 36!

How did you celebrate winning the Miss Red Rock crown?

When I obtained my title back in February, I immediately started working on my action plan for the year. My mom and I went straight to Victoria Claires and picked out several outfits for a debut photoshoot. Some of the pictures from the photoshoot were published in Dreamy Magazine.

What is your strongest memory from the recent Miss Nevada competition?

Night 1 of the competition was very vivid for me. After my

social impact pitch, I was asked a question about diversity in the Miss America Organization. I mentioned how seeing Caressa Cameron as a young girl inspired me during a time when I was actively being bullied for being African American. I also mentioned how Emma Broyles making history as the first Korean American Miss America will have the same impact on another young girl. I remember seeing the audience cheering and feeling so grateful that I had a chance to share my story and my love for the Miss America organization on stage.  I also got to talk to four former Miss Nevada’s after the awards ceremony, so it was truly an incredible night.

Is there a specific goal you’d like to accomplish during your time as Miss Red Rock? 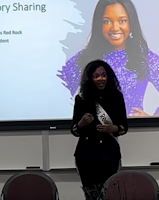 I aimed to speak to 100 people about human trafficking and coercion during my year of service. The only way to spark prevention is through education the community.  I recently spoke at the African American student ‘Overachievers’ event at UNLV where I was able to talk about some of the warning signs. I have also worked with several human trafficking reform organizations in Las Vegas such as ‘Be-a-shero.” I have already agreed to interview with another human trafficking social media page later this year and I’m happy to say that I have nearly reached this goal!

How did you select your social impact initiative, “ThehealthofourHumanity”?

I was 16 when I was waiting for my mom to pick me up from a mall. Later, I was approached by a stranger who asked me strand of random questions and then asked me if I needed a ride to a destination that was only a crosswalk away. I declined and found out a year later from a girl I knew at my local dance academy that her friend was nearly put into a white van at the same complex. I have worked to spread awareness about the current scams that traffickers are using through social media and community service work. It’s been two years since I created my SII, and It’s been such a rewarding experience to talk to so many young women who have survived abuse and trafficking. One of my favorite stories was from a freed woman who told me she created her own ministry and wrote a book about her journey to find peace.

As a talented performing artist, what do you enjoy most about sharing your talent on stage?

My favorite part of onstage performances is getting to see the immediate response from  audience. I played Queen Margaret from the Shakespearean play King Henry. My performance was inspired by Angelica Houston from the film “Ever After.” She was cruel to her stepdaughter (Drew Barrymore) out of jealously which is one of the leading reasons Queen Margaret is seething during the monologue. I enjoyed being able to travel back in time and transform myself into a completely different character. I was very grateful to hear a lot of positive feedback from other people.

You were able to appear in a couple episodes of “Two Degrees” on Brick TV. What was that experience like? 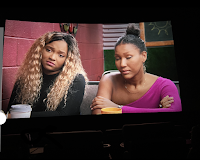 I filmed in Los Angeles back in September and I worked alongside Vanessa Estelle Williams (New Jack City) Miguel A Nunez (The Family Business) and Tico Wells (The Five Heartbeats ) The premiere was at a cinema in Los Angeles, and it was the first time I saw my face on the big screen!

If you could be a Disney character for a week, who would you choose? Why?

This is a difficult question, because I find myself relating with so many childhood favorites! However, I’d like to be Jim Hawkins from “Treasure Planet.” He is a thrill-seeking adventurer from a small town. Throughout the film, he goes through a self-transformation and discovers that there is more inside of himself than searching for riches and fame. Growing up in a small town in Kentucky, I found myself relating with Jim. Sometimes we can become so wrapped up in our objectives, that we forget how short life is and that we need to find little ways to enjoy the blessings inside of every new day.  I also relate because I love to travel and haven’t lost my own sense of adventure.

If you had an extra ticket to a Las Vegas Aviators baseball game, who would you take with you? Why?

My older brother used to play baseball along with other sports in high school, so I’d take him! I would need someone who would be able to explain in detail what is going on during the game. I also know that I’d have a lot of fun with him because he’s one of my best friends.

Is there a feature or activity at a baseball game that you’d especially like to experience?

I’ve always wanted to make the first official pitch in a game. That has always been the most exciting part for me to watch. I’ll have to get someone to teach me one day so I can take this off my bucket list!
---
That does sound like fun!
As always, I want to thank Alexia for visiting with us, and for sending along the pictures to go with the interview.
As Alexia continues her time as Miss Red Rock, I encourage you to check out her title's Instagram, as well as the one for her SII. They're great ways to keep track of everything she has going on!
Thanks again Alexia, and good luck!
Posted by Section 36 at 1:36 PM
Email ThisBlogThis!Share to TwitterShare to FacebookShare to Pinterest
Labels: human trafficking, Miss America, Miss Nevada, Miss Red Rock, visitors