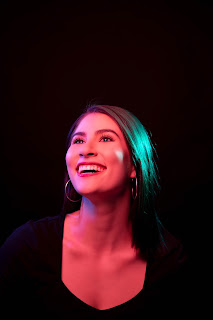 Section 36 had another visitor! Heather Renner is passionate about breaking the fourth wall, a talented singer, and the current Miss Nevada. I was thrilled that she was willing to visit with us to discuss those topics, and a few more.
So, let's see what happens when Heather Renner visits Section 36!

How did you celebrate winning the Miss Nevada crown?

After the stage portion of competition had concluded (and after we had wrapped up taking pictures with all my favorite people), the Miss Nevada board threw myself and my darling teen, Megan, an amazing party. Many of the Forever Miss Nevadas were in attendance, and I was overjoyed to start asking them all about their Miss America experiences so I know what to expect!

The next morning, we had breakfast with the judges where I had the opportunity to thank them for changing my life. I then probably went home and ate ice cream with my mom!

What is something that Macie Tuell did as Miss Nevada that you would like to emulate or expand upon?

I have looked up to Macie since the very beginning of my journey in the Miss America Organization. I had the pleasure of competing with her my very first year at state competition, in 2014. Macie has been an incredible advocate for those with Alzheimer’s and an role model to all Nevadans for her tenacity and humor.

What part of the upcoming Miss America competition are you most excited about?

I can’t wait for the talent event! Being able to showcase my opera artistry is always a pleasure. Through my work with my performing arts-based Social Impact Initiative, I have learned that kids secretly love opera! It’s so important to make classical singing accessible through a high-energy performance, as well as offering translations into English so American audiences can actually connect to the material. I believe that most people who don’t like classical vocal music just haven’t found the right performer yet!! And it is so exciting to think that I could be that performer for the Miss America audience.

How did you select your social impact initiative, “Breaking the Fourth Wall”?

When I started my journey in theater, I was incredibly shy. I didn’t know if I had anything valuable to say, so I mostly kept quiet. Theater gave me an accepting environment where I could start to break out of my shell. Speaking in front of large groups became easier, I found a strengthened sense of self-worth, and I began to live more positively and consciously. Teaching kids to tap into their creativity helps them understand that they can be anything they want to be: if they want to be more confident, well-spoken, or kind, they can make up a character with those qualities and “act” as that character until those qualities become second-nature. Our kids need these skills now more than ever because of the social isolation they experienced during virtual learning; I am so happy to help young Nevadans break out of their shells. That’s the power of performing!

As a talented singer, what do you enjoy most about performing your talent on stage?

The aria I will be performing, “Mein Herr Marquis” is very comedic. Most of the trills and runs in the song are written as laughter, so I can really ham it up. I want the audience to laugh along with me, and they usually do!!

Which role in a Broadway musical would you most want to play?

Carlotta from “Phantom of the Opera” is a dream role of mine. She has these fabulous coloratura songs that fit my voice perfectly, has to do minimal amounts of dancing, and gets to wear ornate gowns the whole show. What else could you ask for?!

“Phantom” was the musical that made me realize I loved musical theater. It was also the reason I started classical vocal training!

How would you complete the sentence, “I get great satisfaction when…”?

…when I am at the gym. I can now do three consecutive pull-ups, which might not sound like much, but that would have been unfathomable a year ago. Seeing the improvement in my muscles has made me feel so powerful and confident!

If you had an extra ticket to Reno Aces baseball game, who would you take with you? Why?

I would definitely choose my best friend, Ethan! We grew up together in Reno, so I always see him when I am in town. There’s no one I would rather spend the game with than him. Although… I think both of us would be more interested in the snacks than the game itself!

Is there a feature or activity at a baseball game that you’d especially like to experience?

Hmm… well I have been very lucky to sing the national anthem at games in the past, so I don’t know what new experiences I’m missing out on! Perhaps a cotton candy eating contest would be up my alley… I would definitely win!

---
That would be a fun contest!
As always, I want to thank Heather for visiting with us, and for sending along the pictures to go with the interview.
As Heather continues her time as Miss Nevada, I encourage you to check out her title's website and Instagram. You can also be sure to follow her personal Instagram! They're great ways to keep track of everything she has going on!
I also want to wish her the best of luck when she competes for the Miss America crown this winter. It would be wonderful to have another Section 36 visitor wear that crown!
Thanks again Heather, and good luck!
Posted by Section 36 at 1:36 PM
Email ThisBlogThis!Share to TwitterShare to FacebookShare to Pinterest
Labels: Miss America, Miss Nevada, Performing Arts, visitors