I'm sure that you all remember that I finally completed my 1975 Topps set.
Now that it's done I thought it would be fun to look through the set and talk about it. Going page by page seemed like a good way to go about it. Hopefully you find it interesting to read what I have to say.
How about we continue with page 72? 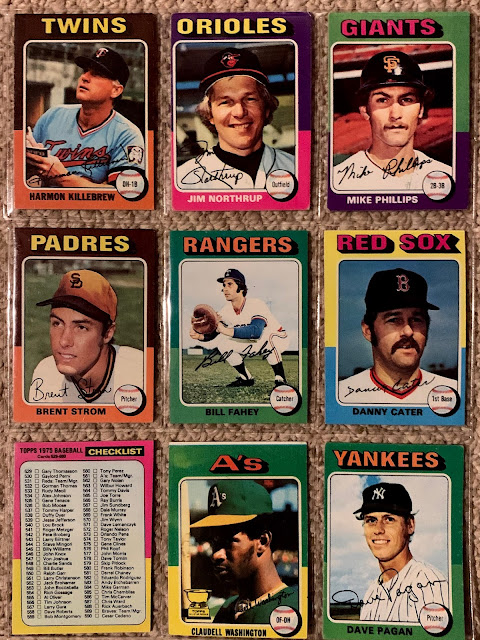 1. Danny Cater. There may be one on the checklist...in fact, there probably is...but I'm not going to look.

Has to be the Killebrew. I know the 1975 Topps set probably doesn't set a record or anything, but I've said that one of the things that attracted me to the set what the passing of the torch aspect. You had cards of players like Killebrew who was playing baseball in 1954, and cards of players like George Brett who was still playing in 1993. That's almost 40 years of coverage in the set. (Has Night Owl ever determined which set covered the longest timespan?) So being able to have a Killebrew is a great bonus for this page.

Posted by Section 36 at 2:36 PM
Email ThisBlogThis!Share to TwitterShare to FacebookShare to Pinterest
Labels: 1975 Topps Page by Page