It’s time to take another dip into the scorebooks, and see how certain players did during games I attended.

I was initially surprised when I looked back over the scorecards to see how few games I saw in which Konerko played. After all, if you remember, I saw Derek Jeter play live a whopping 24 times. Sure, the Yankees played the Red Sox more than the White Sox did, thanks to unbalanced schedules. But, I still would have expected a higher number. As it turns out, I saw Konerko play in Fenway eight times. Not exactly the sample size I was hoping for. But, it is what it is.

How did Konerko do in those eight games? 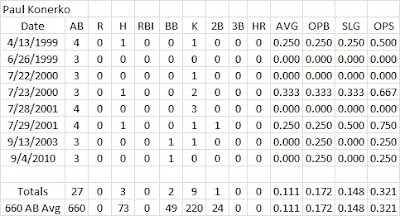 In those eight games, I saw Konerko come to the plate 29 times. I saw him reach base five times. Two singles, a double, and two walks. That’s it. That’s works out to a 0.111 batting average. That’s not good.

Obviously, he was cursed by a small sample size. He’s a better player than that.

On the flip side, from a fan point of view, eight games is a lot. It’s weird that I never saw a player of Konerko’s caliber have a good game. He didn’t have a multi-hit game when I was in the park. Heck, he never reached base more than once. It’s too bad, really, that I was robbed of the Paul Konerko experience, even after all those tries. I managed to capture the true Pedro Martinez while I was there. I was even able to grasp the essence of Derek Jeter. Konerko? Not so much. It’s too bad really. Even though a poor performance by Konerko probably means a good day for the Red Sox…

I feel cheated.
Posted by Section 36 at 12:34 PM
Email ThisBlogThis!Share to TwitterShare to FacebookShare to Pinterest
Labels: Live Stats