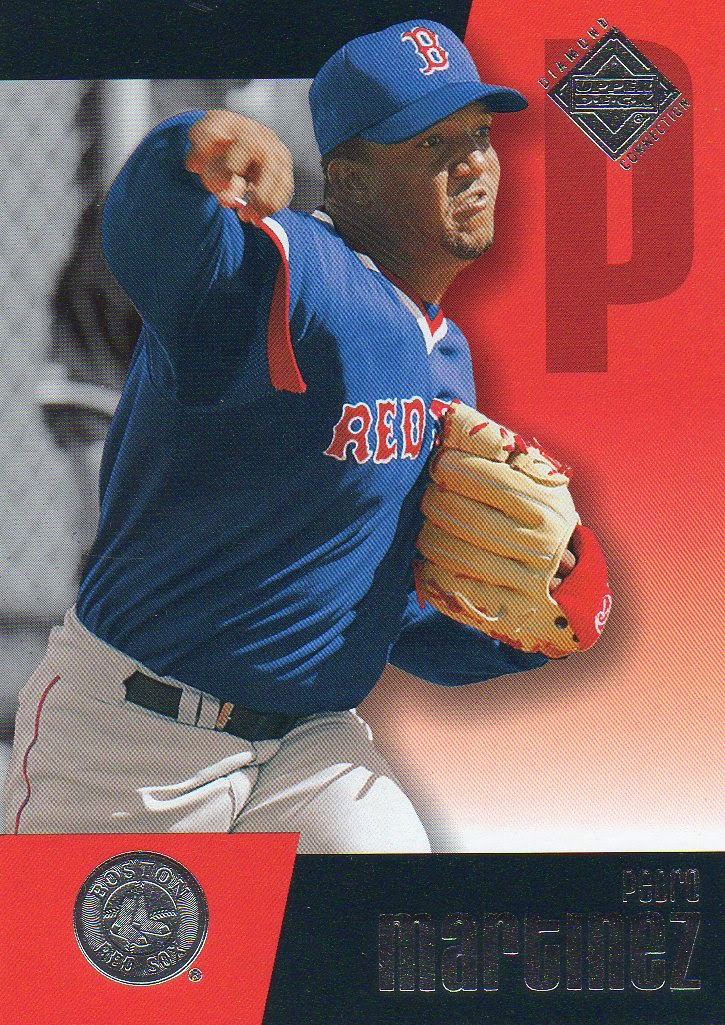 (It’s the card I had with the most red on it! Happy Valentine’s Day!)

Another throwaway card. The “Diamond Connection” name is just sort of there. It’s baseball, so let’s name it after a diamond. Not that every name has to have something to do with the design, obviously. “Topps” rarely has anything to do with the design. But, that’s a base set. If you’re going to make an additional set, and give it a clever name, at least make the clever name relevant.

I actually like the design. I like the layering effect of the graphics and the picture. It gives the impression that Pedro is trying to throw the ball out from between two red walls. I’m a sucker for that.

The name being in foil is, of course, annoying as all get out. Especially on a black background. Why wouldn’t we want to read the player’s name easily? The Diamond Connection logo being in foil is just fane. I have no need to read that easily.

The pitcher’s “p” is oddly enlarged. But, it actually almost makes it look like a design as opposed to a letter. That helps out a bit.

I also like pictures that clearly show Pedro’s torn sleeves. I’ll never quite understand the point, when he was wearing a tight-fitting long sleeved shirt underneath his jersey. But, who am I to argue with Pedro?

So, for a pointless card that looks like it was thrown together from scraps of other cards, the finished result isn’t bad at all. It would never make a top ten list. But, I don’t have to flip the page quickly to avoid it.

That’s not nothing.
Posted by Section 36 at 12:36 PM
Email ThisBlogThis!Share to TwitterShare to FacebookShare to Pinterest