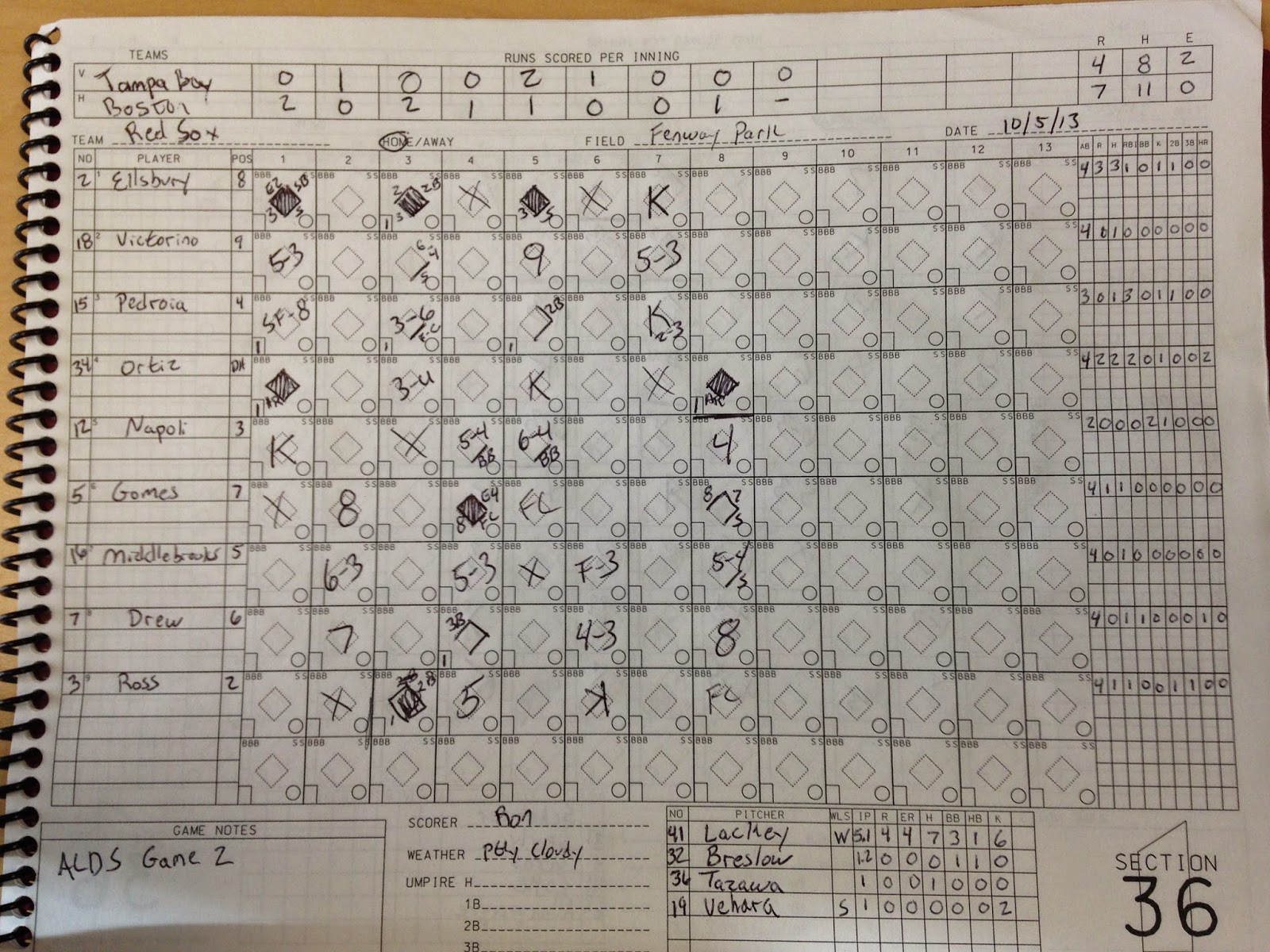 Here we are with another exciting scorecard to take a look at. I wonder what we’ll find.

What stands out almost immediately? The little notation in the “notes” box. This game was, of course, Game 2 of the 2013 American League Divisional Series. I’d say that makes it a pretty big game. Eh? John Lackey vs. David Price. Not sure it gets bigger than that. After taking game one, the pressure is really on the home team to also take game two to preserve home field advantage. Looks like that’s exactly what the Red Sox did. They scored runs early, and often. The pitchers box shows a great job by the bullpen to preserve the lead. That would, of course, end up being a common theme throughout the 2013 playoffs. Lackey turned over a 6-4 game, and the bullpen made it stick.

The player of the game? Lots of choices on this one. It looks like three players stand out. Ellsbury kept getting on base and scoring runs. If that’s not what you need from your lead-off hitter, I don’t know what it. Dustin Pedroia also filled his role nicely. When your number three hitter has three RBI, he’s doing his job. Much like David Ortiz did from the clean-up spot. Two home runs is exactly what he’s paid to do. I’m tempted to give the nod to Ortiz. After all, his two home runs off a tough lefty ace were probably more important than the two runs they accounted for. They really set a tone for the series…and the rest of the playoffs. But, in the end I have to give the nod to Ellsbury over Ortiz’s two solo shots and Pedroia’s one hit.

How about the goat? Looks like only one hitter went hitless on the day. Mike Napoli turned that trick. But, he did walk twice. Because of that, I’ll have to give the horns to Will Middlebrooks. He did get the one hit, but it was a meaningless one in the last inning. Hard to call that very helpful.

Of course, in the end it didn’t matter. The top of the order carried the team to a well-earned victory. The Sox went to Tampa (Ok, St Pete.) with the 2-0 series lead, and were able to close it out down there. They were on a roll.

Posted by Section 36 at 3:23 PM
Email ThisBlogThis!Share to TwitterShare to FacebookShare to Pinterest