It is dead in Red Sox land at the moment. I’m having a hard time getting excited about the rumors surrounding a .230 hitting catcher, who can play a really bad first base. There is just nothing to care about, and even less to write about. That was why I was so excited to recently receive a package from Night Owl.

Not too long ago, I sent him a few cards he needed. He responded my sending a few Red Sox cards my way. It was my favorite type of trade. I’ll send you a bunch of stuff. If you have a bunch of stuff to return, that’s cool too. It makes it a surprise to receive, and to look through the package when it arrives. Here is a selection of some of what NO sent over. 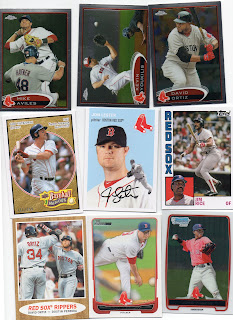 The Chrome cards are very much appreciated. I didn’t get much Chrome this year, so those are key additions. Any time you can add a Yaz card unexpectedly, it’s a good day. The Jim Rice Archives card makes a second Hall-of-Famer. Nice! Granted, neither Rice nor Yaz play for the Sox anymore either…but at least neither of them ever played anywhere else.

How about Active Sox? Got plenty of those too. David Ortiz makes a couple appearances. Dustin Pedroia makes one…which means there are three MVP in the picture. I love the Jon Lester Archives too. That face is just perfect for that design.

There’s even a future Sox included in Jose Vinicio. I have no idea who that is. I know that I hear about two shortstop prospects endlessly. But, this isn’t Jose Iglesias or Xander Bogaerts. So, Vinicio is at least the third best shortstop prospect in the system. But, he’s only 19, so that could always change.

Overall, a fantastic package to have show up in my mailbox. It’s the perfect way to get through the off-season blahs. Especially this year.

Thanks Night Owl!
Posted by Section 36 at 3:12 PM
Email ThisBlogThis!Share to TwitterShare to FacebookShare to Pinterest