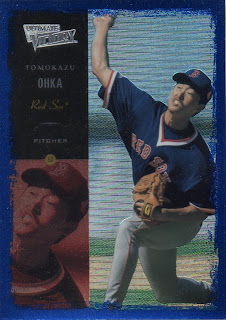 Wow, there’s a lot going on with this card. The most overpowering feature is the blue. It doesn’t show as well in the scan, but the whole thing has a blue tint to it. Talk about distracting. This was part of the wave of cards that assumed “high end” meant shiny and hard to read.” In it’s basic parts, this card is well done. It has the nice action shot cropped to make Ohka stand out. It has the player name, team name, and position clearly shown. Even the player’s number makes an appearance. If I made a list of things I need to have on a card, this would get them all. It even throws in an extra headshot of the player. I even like the border, giving the appeal of a painting.

So, I can understand in a production meeting, everything going well. But, once they threw it all together, it went crazy. Especially in this card, the fact that the headshot is a crop of the larger image is awkward. Maybe if Ohka weren’t making such a weird face, it wouldn’t be so bad. It’s really the blue sheen that ruins the card. It makes everything almost impossible to read unless you constantly tilt the card in different direction to catch the light. Otherwise, this would be a pretty nice card.

Instead of a mess.
Posted by Section 36 at 1:59 PM
Email ThisBlogThis!Share to TwitterShare to FacebookShare to Pinterest