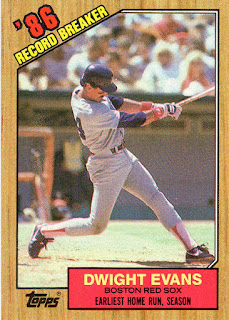 When people talk about baseball records that will never be broken, they often bring up Joe DiMaggio’s record 56-game witting streak of the gold standard. Nobody ever mentions Dwight Evans and his record, honored by this card. Evans set the record by homering on the first pitch of the season. Let’s just see somebody break that record!

When I first saw this card, I was unaware of Evans’ feat from the year before. So, I was initially confused by the record, as stated on the front. The word “earliest” threw me. I always associate “early” with “time.” So, I would expect the earliest home run to be the one that comes first chronologically. So, I wondered why Evans had hit his home run earlier in the year than anyone else. Did the Red Sox happen to play a game on an early day on the calendar? Or, was it time? Since it was in Detroit, did the time zones help make it early in the day? Was 12:05 ET really early in the day for a home run? But, no. The card is referring to the number of pitches into the season. Even that begged questions. Was it the first pitch thrown that year by anyone in major league baseball? Was it just the first pitch thrown in that game? If the Red Sox were the home team, would it still have been the first pitch? So many questions.

But, the actual record is fairly irrelevant. It’s a card made to honor a specific feat from the year before. In that, it does a good job. The card is clear, other than the vocabulary. It nicely says that it’s a ’86 record breaker. It gives the name of the player, his team, and the accomplishment. And, it does all that without detracting from the picture on the card. It would have been fantastic if the picture were of the actual record breaker. But, that doesn’t look like Tiger Stadium to me. (What do you say, Jere?) At least Evans is in his road grays. And, he appears to be making pretty good contact with his swing. So, it’s a decent representation.

All of that makes for a great card.
Posted by Section 36 at 3:18 PM
Email ThisBlogThis!Share to TwitterShare to FacebookShare to Pinterest