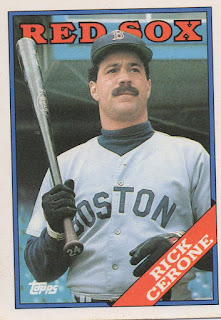 If last week’s card of Bill Hall was a wonderful card, this one is not so much. It’s simply a filler card to make sure everyone was represented in the set.

I’ve said before that I’ve always liked the design of 1988 Topps. I love that the player’s picture overlaps the team name at the top. In this case, both Cerone’s head and bat cover up the name. (Although, that looks to be Dwight Evans’s bat, not Cerone’s?) I also love the ribbon effect for the player’s name. It makes the picture seem bigger than it is.

Once you get by the design elements, there’s not much to talk about. Cerone is looking off towards something in the distance. He looks like he couldn’t be less interested in taking pictures. He just grabbed the first bat he found, ran into an empty stadium, and waited for the session to be over. This is the kind of picture that makes you wonder what the other pictures from the session that they threw out looked like.

The card filled its purpose, though. People could get a card of Cerone to add to their Red Sox collection. It’s interesting, though, that if Topps put this card out today, people would while forever about how the Topps monopoly made them just mail it in. Of course, in 1988 there were three other companies making cards for the first time ever. If this is the card they put out when facing their most competition ever, maybe the exclusive license isn’t make them lackadaisical.

Maybe, sometimes, you just toss a dud up there.
Posted by Section 36 at 6:51 PM
Email ThisBlogThis!Share to TwitterShare to FacebookShare to Pinterest