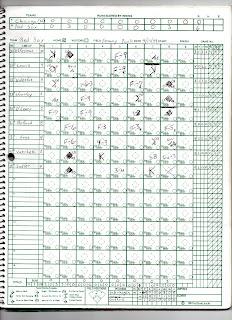 The Home Opener. It’s a magical time. We get our first chance to see the team in their whites. What can we expect from them during the season? It’s all looking up on Opening Day.

The Sox were playing the Sox on this day. Bret Saberhagen got the start for the Sox. He was coming off a 15-8 season the year before. It was hoped that he could provide just enough help for Pedro Martinez to lead the Sox back to the playoffs. Things looked pretty good in this start. Almost seven innings of shutout ball, on the way to the win. Saberhagen finally handed the ball to Derek Lowe after giving up a two-out hit in the seventh. Lowe made a but of a jam, but teamed with Mark Guthrie to close it out. There was minimal pressure with a three-run lead at the time.

That lead was extended to a six-run victory by the time it was all over. And just look at that offense. Buford, Frye, Varitek, Sadler finishing off the line-up. There wasn’t even Nomar in the line-up to help things out. But, it was that bottom of the order that got things rolling for the Sox when Varitek and Sadler both walked in the third. I always though Donnie Sadler was the faster player I had ever seen…at least until Ellsbury sprinted into view. Watching him score from first on a triple is just pure joy.

Another set of back-to-back walks led to another big inning for the Sox in the eighth. In this case, Troy O’Leary foreshadowed his October performance with a three-run homer.

The star of the game? Troy only went 1-4 in the game, but I have to give it to O’Leary and his 3 RBI. The team’s goat? Damon Buford was the only player not to reach base for the Sox. Since he was batting sixth, that problem was magnified.

In the end, it didn’t matter. The also-rans in the line-up got the job done. Saberhagen gave it everything he had, and the Red Sox cruised to a victory over the pale hose.

And the scorecard shows how it happened.
Posted by Section 36 at 3:15 PM
Email ThisBlogThis!Share to TwitterShare to FacebookShare to Pinterest