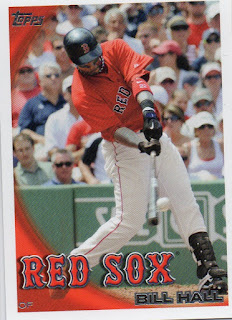 Wow. What a card!

Let’s just jump right to the picture. That picture should be blown up and handed to every kid playing baseball in the country. Arms straight. Front leg straight. Back leg bent. Eyes right on the ball at the moment of impact. All of that captured wonderfully in the shot. Balls in the pictures on baseball cards aren’t anything new. But, to have it right there in that shot really adds something. The picture is perfectly cropped to allow us to give full attention to Hall. Fantastic.

The Design of the card works well with the photo too. The red jersey on Hall is complimented by the red sweep of the border. I really like how some of the picture is covered, but not hidden, by the border. The team name is a bit too large. But, this was the first year of the Topps monopoly. So, they were bragging a bit that their cards had logos on them. At least the team logo is also red, so it really blends into the overall look of the card. The foil player name drives me nuts. But, all the information is there. Team, name, and position. The few problems with the look of the card don’t detract enough from the overall appeal.

This is a great, well-done, card.
Posted by Section 36 at 12:52 PM
Email ThisBlogThis!Share to TwitterShare to FacebookShare to Pinterest