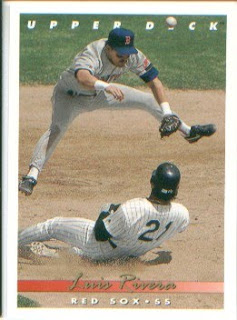 Best Picture: Luis Rivera. Rivera is show in full flight as he attempts to turn a double play. The ball is already in the air. Now all Luis needs to worry about is staying out of the way of the sliding runner. A great action shot.
Hall of Famers: Andre Dawson
Future Hall of Famers: Roger Clemens
Reason to Buy the Set: Hall-of-Famer Andre Dawson stands out. He wasn’t a long-time Sox or anything. But, he has some hobby draw. Add in Roger Clemens, Mo Vaughn, and Frank Viola and you have some decent resumes in the set.
Overall Reaction: This is a set I would have just to have. It’s bleh in almost every respect. The design isn’t particularly striking. The player selection isn’t all that hot. If you want all the Red Sox sets, or all the Upper Deck Red Sox set, you’ll have to grab this set up. Otherwise it doesn’t do anything for me.
Posted by Section 36 at 9:36 AM
Email ThisBlogThis!Share to TwitterShare to FacebookShare to Pinterest
Labels: team sets