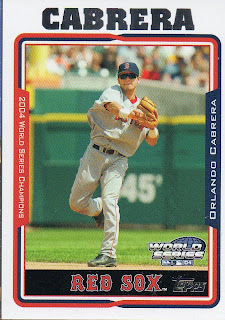 I’m trying to remember how the Red Sox acquired Orlando Cabrera. I think it was some sort of trade, or something. Can anyone remember the exact details of that transaction?

Of course, no Red Sox fan can ever forget that Cabrera was the largest bean in the bag the Sox got when Theo traded away Nomar Garciaparra. He was a solid player with a history of sparkling defense at short. He was the kind of shortstop that many teams would be happy to have. Really, other than Boston, Oakland, and Texas, he was probably an upgrade over any other shortstop. The problem for Cabrera was the place he was traded to was Boston. But, he did his best to make the trade look reasonable.

He clubbed a home run in his first at-bat with the Red Sox. He went on to have several key hits for the Sox during the stretch run. He even plated a game winner against the Yankees as the Red Sox were fighting to stay in contention. And, along the way, his defense was exactly as advertised. His play up the middle was fantastic. He was smooth and effective. A fabulous combination.

The play that sticks out for me when it comes to Cabrera was more something he couldn’t do that what he could do. In the first inning of game one of the 2004 World Series, he couldn’t get out of the way of a pitch. It plunked him in the helmet. Being the rational Red Sox fan I was at the time, I naturally assumed this was the end of the Red Sox season. Of course, in the first inning of the series the Sox would lose their starting shortstop. Of course that’s the way it would work. Of course whichever guy they stuck in at short would make four errors a game for the rest of the series. Of course, the Sox would complete the greatest comeback in the history of sports only to have their dreams squashed two freakin’ batters into game one. Ok. So maybe I wasn’t all that rational. Cabrera ended up making his way to first, and scoring when David Ortiz followed with a 3-run home run. The Sox never trailed in the series.

Curiously, the Red Sox didn’t keep Cabrera after the 2004 season. There were rumblings that he might not have been the best clubhouse presence. That always struck me as odd. After all NESN (who owns them again?) couldn’t stop showing clips of him getting along with his teammates. Special features of him and his handshakes flooded every broadcast for the rest of the 2004 season. The clear message? This shortstop was fun and easy to get along with…not that other shortstop they got rid of. So, it was interesting to hear that one of the reasons he was allowed to leave the team was clubhouse chemistry.

Cabrera’s time with the Sox, though, certainly was full of activity. He was on the field when the Sox won their first World Series in 86 years. That’s not nothing.

Posted by Section 36 at 7:36 AM
Email ThisBlogThis!Share to TwitterShare to FacebookShare to Pinterest
Labels: Happy Birthday, Orlando Cabrera