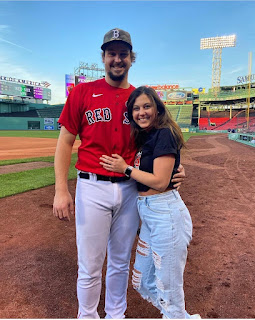 As you may be aware, since Section 36 occupies a spot in the centerfield bleachers in Fenway you get a nice view into the Red Sox bullpen. I imagine that would make it a good place for Emily Taylor to visit, since her new husband Josh spends a lot of time there. Emily is a business owner, and has held several jobs across sports. I’m so excited she was willing to take some time to visit with us and discuss those topics, along with a few more. I know you’ll enjoy reading everything she had to say.
So let's see what happens when Emily Taylor Visits Section 36!

You’re a graduate of the University of Memphis. What did you enjoy most about your time as a Tiger?

I sure am, and proud of it! While at Memphis, I was able to jump start my sports career by first working for the athletic department, before moving on to the professional world. I was also a tour guide for two years. My favorite thing about Memphis? The way the city comes together to support its sports teams—like a family. There is nothing like a full crowd at the Liberty Bowl, or at the Fedex Forum (where both the Tigers and Grizzlies play).

You’ve held several jobs/positions in the sports landscape. Do you have a favorite so far? 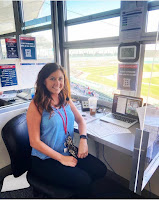 ​My favorite thing to do in sports is work as a Director. To have every aspect of game entertainment in the palm of your hand, literally. You cue the music, graphics, PA announcer, camera shots, all of it into one production. It's a lot of fun to me.

What I love most about working in sports is the people, hands down. I still am close friends with most of my bosses and coworkers from different gigs. One was even in my wedding! Whether you work with them or for them, they are the reason you show up every day; ask anybody who has ever been in a control room--they are a special kind of people.

You’re the owner of Taylor.Made 1127. What can you tell me about the company? 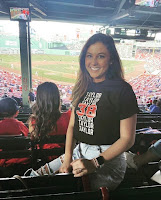 Taylor.Made 1127 is a work in progress... Last spring there were a lot of restrictions for families in the major leagues to keep everyone safe. I invested in a cricut machine and an ipad with my stimulus check (haha) and then just started creating things. My goal initially was to put dogs on koozies, and after I did that, I was like now what? Now I just specialize in totally custom things. I can put anything from your dog to your grandma's handwriting on anything.

You were able to be in the park for Josh’s MLB debut. What was that experience like for you? 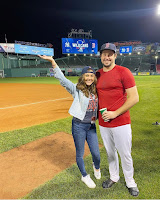 That whole 24/48 hours was such a whirlwind! I was bartending when he called me, and I had a flight booked within an hour. His dad, stepmom, and I flew out to Boston at like 3 am or something crazy. No sleep. It was a big weekend in Boston, and the Bruins were in the playoffs, Harvard, BC I think both had graduations, and the Red Sox series against the Indians... there were zero hotel rooms in the city. We wound up finding a Super 8 20 minutes outside in this city we'd never seen, got two or three hours of sleep, and were off to New York for the Yankees series. We got to see him very briefly before the game, and it was just all so surreal. It was May 29, 2019. And it was cold. But seeing the love of my life run onto that field for the first time, fulfilling his lifelong dream? Indescribable. We were trying our best to freeze time.

How often do you get to see Josh pitch in person? 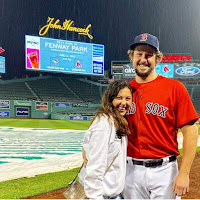 I usually go to pretty much any home game when I know he has a pretty good chance at going in. Unless it's cold, then I sometimes stay home.

Other than Section 36, what is your favorite feature or experience at Fenway Park?

Fenway Park is magical. If you enter by climbing the stairs near I think section 18 where the bathrooms are, the first time you see the field is pure magic. My favorite experience? Sitting on the Green Monster of course. My favorite attraction? The hall of the jerseys that leads into the hall of fame. Again-magical. It showcases jerseys from the generations and instantly you 'get' why the Red Sox are such a big deal historically, even if you're not a baseball person.

Being in the bullpen seems to automatically mean a pitcher will see some criticism during the season. How do you deal with the negative side of Red Sox fan social media?

I don't see that very much, I tend to stay out of it. It doesn't do anybody any good to absorb all the negativity. It is funny, though how fickle Red Sox fans can be. They don't say much until Josh has a bad day or outing... but when he has 26 scoreless appearances in a row? Radio silence 😀 .

---
I think staying out of it is a pretty good idea.
Of course, I want to thank Emily for taking the time to do this interview, and for allowing me to use the pictures that go along with the post. They always help tell the story better.
I definitely suggest you check out Emily on Instagram, and follow along with Taylor.Made 1127. It'll be fun.
Thanks again Emily!
Posted by Section 36 at 2:36 PM
Email ThisBlogThis!Share to TwitterShare to FacebookShare to Pinterest
Labels: Emily Taylor, Josh Taylor, visitors