I'm sure that you all remember that I finally completed my 1975 Topps set.
Now that it's done I thought it would be fun to look through the set and talk about it. Going page by page seemed like a good way to go about it. Hopefully you find it interesting to read what I have to say.
How about we continue with page 60? 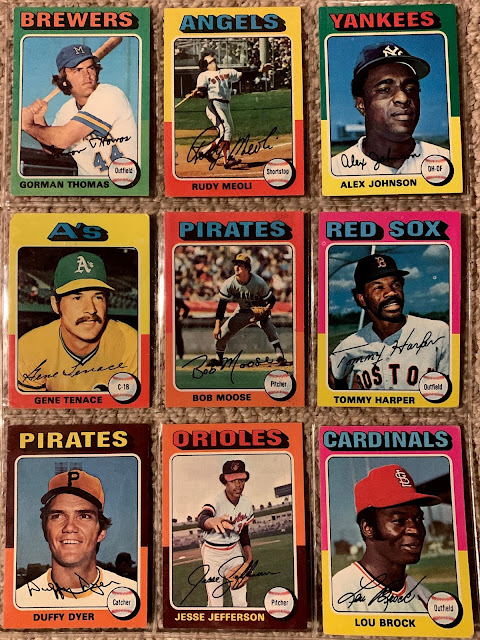 1. I remember Tommy Harper more as a Red Sox coach than as a player. But, here he is as an outfielder.

Players from the 1975 World Series are cool. But, Harper isn't one of them. By the 1975 season itself, Harper was playing on the West Coast. He was actually on the Oakland team that lost to Boston in the ALCS that year. Cards of Hall of Famers are cool. Lou Brock certainly fits that bill.

For some reason, the Rudy Meoli card calls to me. Love the idea of using a card picturing him tracking a (most likely) foul pop out. Quite an "action" shot to look at for a year.

Posted by Section 36 at 3:26 PM
Email ThisBlogThis!Share to TwitterShare to FacebookShare to Pinterest
Labels: 1975 Topps Page by Page, Tommy Harper