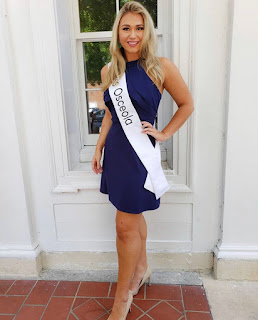 Section 36 has a new visitor! Kylie Blakely is an advocate for preventing soldier suicide, a talented pianist, and the current Miss Osceola. I was excited that she was willing to visit with us to discuss those topics, and a few more.

So let's see what happens when Kylie Blakely visits Section 36!

How did you celebrate winning the Miss Osceola crown?

Previous to Miss Osceola I had never competed in a pageant, let alone seen one from start to finish including Miss America. I remember the month prior to the pageant I was struggling getting hours at my job in Lake Nona and I remember praying and asking the Lord to help me find a way to make ends meet for my tuition that was coming up. I was told about the pageant around 6 days prior at a charity event I was attending and I knew God had put me in the right place at the right time. With less than five days to prepare for my first pageant ever it was a whirlwind, the day of even seems like a blur now. I remember being genuinely shocked I had won and simultaneously bursting into tears with sheer joy. That night I was so exhausted I didn’t get to celebrate properly however the next day the Osceola County Fair helped me celebrate by walking the fairgrounds, meeting the amazing men and women who made our scholarship pageant possible and awarding ribbons to the phenomenal FFA kids!

What is your favorite memory from this summer’s Miss Florida Competition? 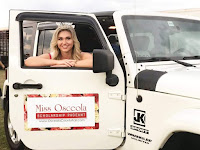 My favorite memory from Miss Florida has to be orientation, it was a wonderful experience meeting so many empowering women. I remember vividly, sitting by Rachel Barcelona, Amanda Shoopman and the Zavitz sisters and taking it all in. Every woman in the room had a crown and walked with her head high, every woman would leave this competition with a crown and continue doing amazing things in their communities, and every woman in that room was going places. I felt so empowered to sit by future Educators, Scientists, Doctors, Farmers, Reporters, Nurses, Performers, and Engineers. That moment of realization has to be my favorite from the entire Miss Florida 2019 experience.

Do you have a specific goal you’d like to accomplish during your remaining time as Miss Osceola? 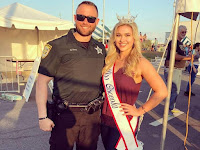 My social impact has been and will remain my biggest goal. It’s not one that ever stops and something we as a nation should all push for. The suicide rates for first responders and veterans are at an all time high and I know there’s ways to combat the unfortunate statistic. Being an advocate for veteran suicide will continue long after I remove the Miss Osceola crown from my head. I hope to continue being an advocate in the 2020 pageant season, using my platform to promote the fact that you’re no less of a hero for seeking help.

How did you select your social impact initiative? 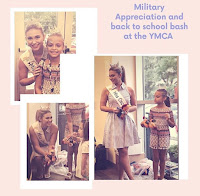 My father is a retired LEO and most of my family is either a first responder of some sort, a nurse or a veteran. I knew growing up I wanted to serve in the Army, I was placed on a waiting list and was told the best thing to do was to finish my degree then join as an officer. In the meantime most of my friends I grew up with were enlisted in various branches and deployed. When some of them came back they struggled with the transition from military to civilian life and suffered from PTSD, depression and the physical toll combat had given them. Veteran suicide rates are something that hits close to home for my family, and after losing someone I know to suicide last December at the Lake Nona VA I knew there was more we could be doing as a community. It began as “Suicide awareness and prevention for first responders and veterans.” After Miss America changed the pitch rules I shortened it to “ Prevent Soldier Suicide” and got to work on promoting and helping where I could. I volunteered at the VFW for several dinners, got in touch with the American Legion who placed an ad in the Miss Florida program book, I helped promote Homes for Heroes and my outreach went as far as Texas, Kandahar Afghanistan, Alabama, Norfolk Naval Base, Fort Leonard Wood Missouri, and Kuwait. My only wish is to gain the title of Miss Florida to promote Prevent Soldier Suicide on national television to create more awareness and bring national attention to a very preventable issue.

As a talented pianist, what are your favorite types of songs to play?

I absolutely love Hayden, Litzt, and the carnival of the animals. My favorite pieces to play are ones that incorporate crossing my hands. Due to a soccer related head injury I have damage that makes it difficult for me to play and I was told I could never play again at the level I was on. However, with many many many hours on the bench and an AMAZING instructor I was able to regain some of what I lost. Crossing my arms in a piano piece is me saying YES I CAN to those who told me I'd never be able to play again as it incorporates the part of my brain that sustained the damage.

You have been able to run in the RunDisney Princess half marathon. What do you remember most from that event? 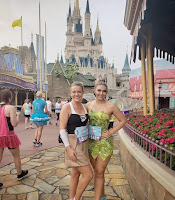 I remember the elation and relief I felt crossing the finish line! I was blessed to represent Childrens Miracle Network the philanthropy of Miss America while running alongside my mentor and former Miss Osceola Jessica Hargrave.

This summer you were able to attend “SI Swimsuit on Location”. What was that experience like?
I’m incredibly thankful for my time participating in the 2019 SI Swimsearch and being VIP at the SI Swimsuit on Location, it was a wonderful event and incredibly empowering. I completely stand behind MJ Day and her choices for the brand, to expand from focusing on the male gaze to what the brand is really about. Sports Illustrated has always taken political stands, featuring Tyra Banks when they 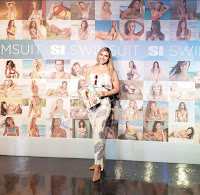 did and doing shoots in Africa during time of conflict to promote awareness. Now in the age of photoshop, negative body image and internalized body dysphoria Sports Illustrated has taken a stand. When you think of the magazine and it’s brand in popular culture most people think “Oh beautiful women in swimsuits” MJ Day has taken the brand to new heights by being inclusive. I had the pleasure of meeting plus sized models, mothers who had become models, models over 40, models with vitiligo and limb differences. MJ Day has given the brand new life by making it more inclusive and body positive, giving women who aren’t supermodels the opportunity to look at SI and say, “This woman is in SI, she’s beautiful and she’s like me! I’m beautiful too!” It’s an incredible environment to be around and I’d love to have the opportunity to do it again!

I hope she gets to make that happen!

As always, I want to thank Kylie for doing this interview, and for sending along the wonderful pictures. They really make the post a lot more fun.

As Kylie continues her time as Miss Osceola, I encourage you to follow her on her official Facebook page. It’s a great way to see what she’s up to during her remaining time with the crown.