Now that it's done I thought it would be fun to look through the set and talk about it. Going page by page seemed like a good way to go about it. Hopefully you find it interesting to read what I have to say.


How about we continue with page 4? 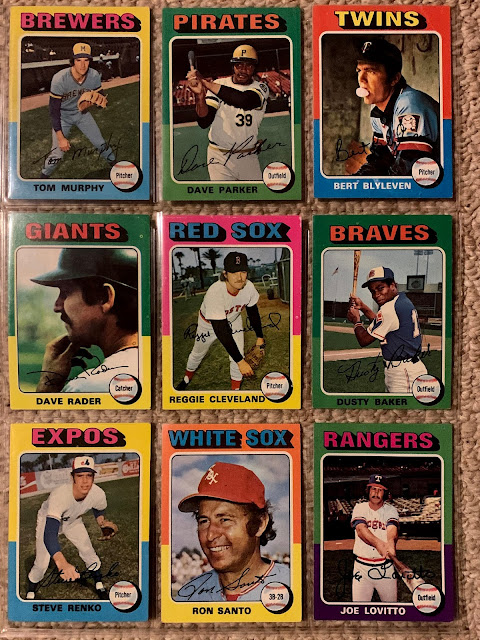 Red Sox Cards on the Page: 1. I think the photo on this Reggie Cleveland card just may have been taken during Spring Training.


Cards that make the 1975 Topps set cool: I’ve said before that some of the fun cards in this set are the early hall of famers I only knew as grizzled vets, and cards of current managers from their playing days. This page has both, and then some. Bert Blyleven would end up making quite a career for himself after this card came out, and Dusty Baker is definitely better known by me as a manager. The added bonus of Ron Santo illustrates the other great thing about the set, the wide spread of player years. Here’s a guy who played in 1960 having a card in the set. Another hall of famer even.


My favorite card on the page: I love the picture on the Dave Parker card...another star I remember only as an older player. It’s a posed shot, obviously, but his eyes are still following the flight of an imaginary ball. I would also be remiss if during “Photography Month” I didn’t mention the shot of a pensive Dave Rader. I assume this wasn’t posed, but it’s the sort of shot I’d expect from Donruss Studio.


What would your answers to those last two categories be?
Posted by Section 36 at 3:13 PM
Email ThisBlogThis!Share to TwitterShare to FacebookShare to Pinterest
Labels: 1975 Topps Page by Page, Reggie Cleveland