Section 36 has a new visitor! Jackie O'Keefe is a talented dancer, a Red Sox fan, and the current Miss Western Massachusetts. I was excited when she was willing to visit with us to discuss those topics, and a few more. I certainly hope you enjoy what she had to say as much as I did!

So, lets see what happens when Jackie O'Keefe visits Section 36!


How did you celebrate winning the Miss Western Massachusetts title?
The feeling of winning the title of Miss Western Massachusetts was indescribable, it had been a goal of mine for several years. Throughout my years in the Miss America Organization I’ve made some incredible friendships, two of them happened to be a major part of my crowning. One is Kensi Riley, who crowned me and passed alone the title of Miss Western Mass. The other is Olivia Clark, who is now my sister queen and was crowned Miss Pioneer Valley. After the pageant we all went out to eat with our families and friends. That was the moment I realized that I was officially in the sisterhood forever. I am beyond excited to share my year with Olivia.


Is there a specific goal you’d like to accomplish during your time as Miss Western Massachusetts?
As Miss Western Massachusetts, I’d love to not only attend appearances in the place I’ve called home for 23 years, but I want to attend all of the Fresh Check Day’s that are hosted by our incredible colleges and universities in Western Mass. Though a handful already have the program on their campus, some have yet to host Fresh Check Day for their students. As a budding Student Affairs professional, I’d like to share this incredible and life changing program with all institutions in the area as well.


How did you select your platform, “Fresh Check Day: Strengthening Mental Health in College Students”?
I am currently studying for my Masters in Student Personnel 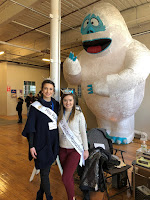 Administration in Higher Education at Springfield College. In short, I am currently and will be providing students with supplemental education through campus programming. Fresh Check Day is a program that was brought to my undergraduate institution and I absolutely fell in love with the messages and resources it brought to my peers. So many students struggle with their mental health, and I have the chance to continue that dialogue with my platform.


As a talented dancer, what is your favorite part about performing onstage?
There are so many things I love about performing. I load my dances with as much technique and tricks as I can. So when I get on that stage and nail a routine, it is one of the best feelings in the world because I have put so much work into a 90 second performance. Each time I learn a new routine, I challenge myself and work towards improving my skill set every time.


You were able to be on field pregame before a Patriots game at Gillette. What was that experience like?
Not only was I fortunate enough to participate in the Patriots NFL kickoff after Super Bowl 49, but I was welcomed back after their Super Bowl 51 win as well. The energy on the field was indescribable, and it felt so satisfying to be a part of the Patriots Nation. At both events, I was able to attend with my friends and it make the experience so much more special. Both times I was on the field with players, but the second time I went I met Mark Wahlberg!


You were able to be at Fenway for David Ortiz’s final game. What do you remember about that game?
I was given a ticket for that game just hours before going, and had no idea that it was possibly Big Papi’s last game! I was pretty close to home plate, and felt the emotions of the fans being so hopeful that it wouldn’t be his final game. When the game ended and the Red Sox walked away with a close loss, everyone stayed and chanted for Big Papi. When he finally came back out for his final walk, everyone in the stands gave him a standing ovation. I was so proud to be a Boston sports fan and Massachusetts native that day.


Is there a feature or activity at Fenway Park that you'd especially like to experience?
I’ve actually never been to a concert before! Being able to attend a concert at Fenway Park would be incredibly fun.


What were you doing when the Red Sox won the 2018 World Series?


I was with my family in Monson MA for the final game! In the O’Keefe household, we never miss out on spending big sporting events together. Leading up to the final game, I actually had to watch online while in class (I promise I’m a good student. But the Red Sox were in the World Series, I had to!).

Absolutely the correct call! I'm sure her professor was more than fine with it.

As usual, I want to give huge thanks to Jackie for doing this interview. I also appreciate her providing so many wonderful pictures to accompany it. So great she had the Moana one especially! I also want to wish her the best of luck as she competes for the Miss Massachusetts crown this summer. It would be so much fun to have another former visitor take home that crown.