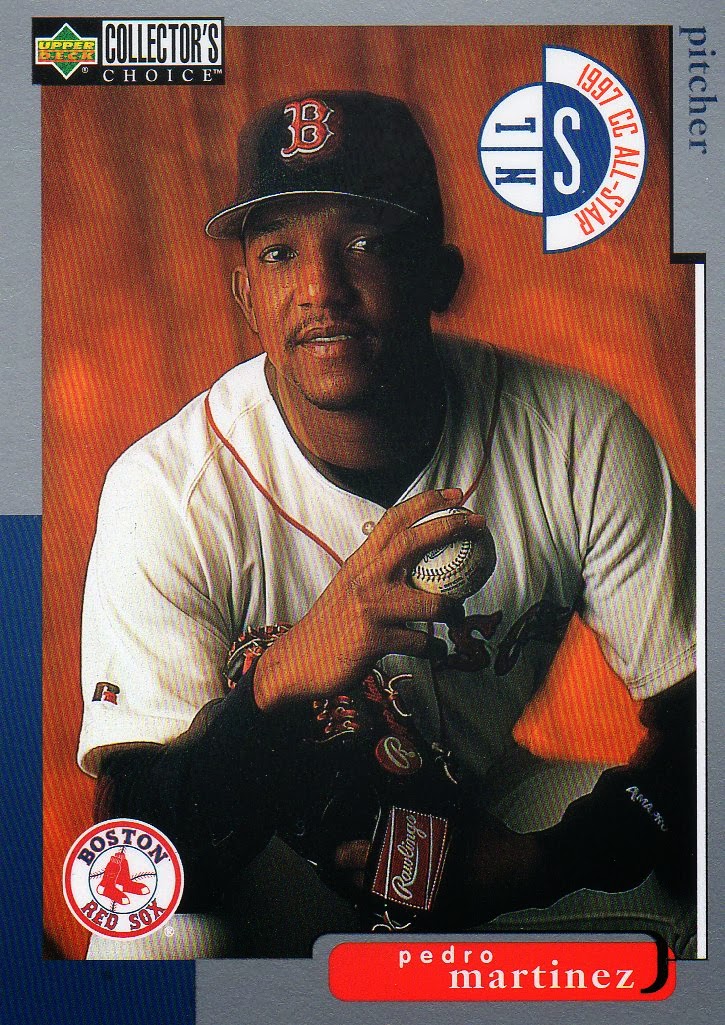 Collector’s Choice cards are supposed to be fun. They don’t take themselves as seriously as the real, premium, Upper Deck cards. They’re a little bit more whimsical. Which is nice. I like some whimsy in my collection.

You can see that in the design. There are some sweeping lines in there, just for fun. Some color graphics. This card happens to be the silver version, so the borders don’t allow the colors to pop as well as a white border would. But, it’s still a lot of fun.

There’s one thing that bothers me with this card, though.

No, it’s not the design. After all, it has the player’s name easy to read in the lower right corner. Perfect. There’s a team logo, and a position. That’s just great.

No, what bothers me is the bizarre All-Star logo in the upper right. It proudly declares that Pedro is a member of the 1997 CC All-Stars for the NL. I’m assuming that the “S” stands for “starter.” While that’s odd, since I assume that everyone on the team was a starter as opposed to a bench player, it’s not the problem. For some reason, the fact that Pedro’s on the NL team bothers me. This is a Red Sox card, celebrating his NL accomplishment. It seems like there’s a mismatch there.

Now, I’ll be honest, I’m not sure what I’d want Upper Deck to do about this problem. Since it’s their own all-star team, they could have just left Pedro off. It’s not like they were documenting something with their cards. Just pick a starter who was in the NL in 1997 and 1998. It would have seemed a bit odd to ignore the Cy Young winner, though. They could have put him on the AL team. But, to be fair, he wasn’t in the AL in 1997. They could have just left off the NL. Then, he’d still be celebrated…but not with an odd looking designation.

Or, I suppose, they could just count of the fact that most people aren’t as odd as I am, and wouldn’t care that it said NL on a Red Sox card.

It just seems weird to me.