The beginning of a new year means many things. Time to make resolutions. Time to work on the Scavenger Hunt. Time to get ready for baseball. One great way to get ready is to open the new Topps cards when they come out. It’s an exciting step on the way towards summer.

I finally found some 2014 Topps cards at my local Target, and grabbed a blaster. How did that work out for me?

I started off with the pack containing the “exclusive patch card.” I haven’t decided how I feel about these manufactured patch cards yet. Sure, they’re something different to collect. But I buy a pack of baseball cards in order to get baseball cards, not patches. Plus, they’re not the authentic patches I’ve said that I prefer. They’re just something that Topps came up with. So, I suppose I tolerate them, but don’t chase them down. In this case, I got this one… 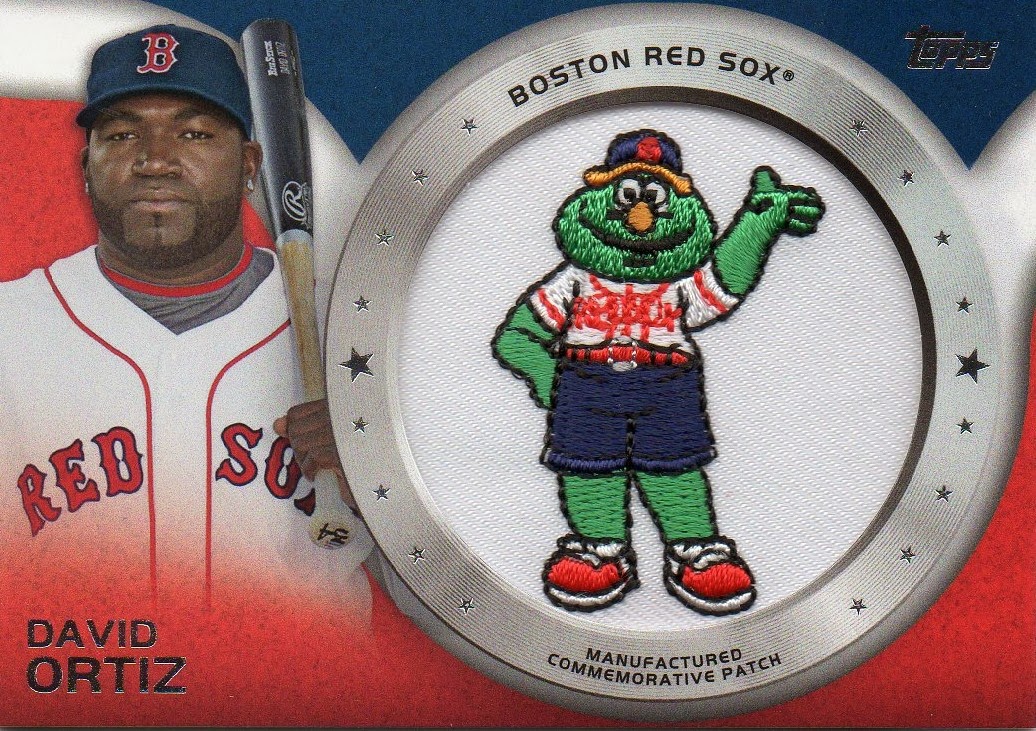 Lookie there. The first card I get from the first thing I open in 2014 is a Red Sox. The card is nice enough. I actually like the whimsical Wally patch. I might even put the card out on display on a shelf somewhere. If I’m going to get an insert that I only tolerate, it’s great that it was a Sox. 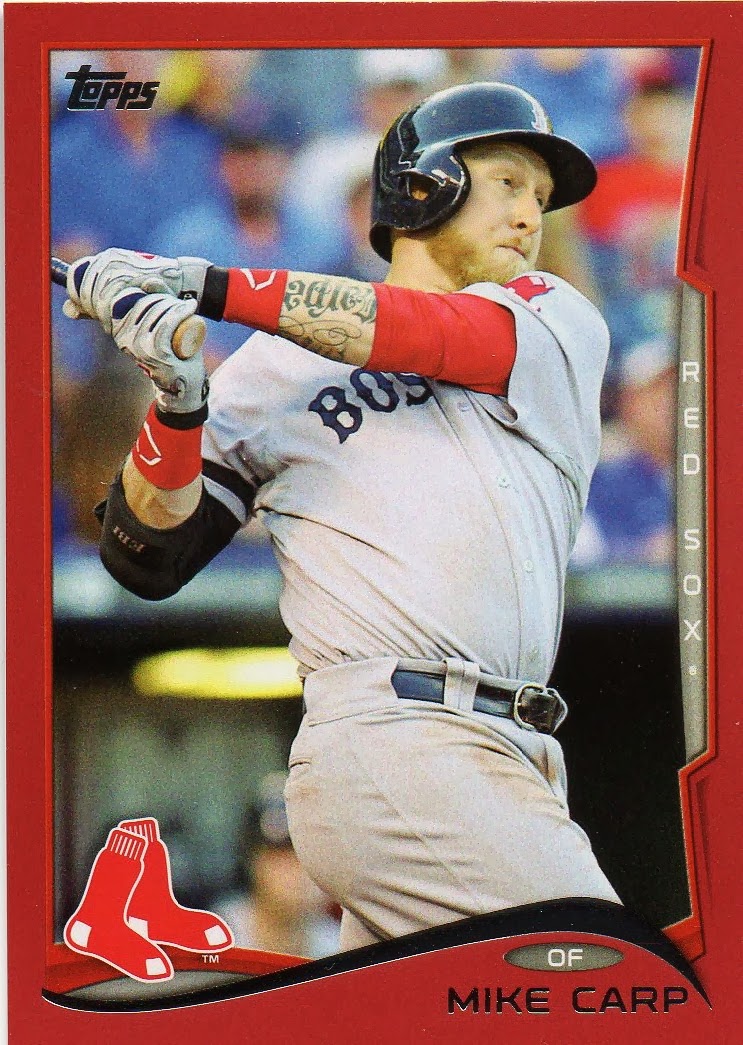 The next Red Sox card that came up was this Target red bordered Mike Carp. As a team collector, the parallels like the Target reds are a little annoying. I don’t like the look of the same card over and over in a binder. (Although, the red borders happen to work well with the Red Sox.) But, as someone who tries to sell off non-Red Sox cards in order to subsidize the Red Sox ones, I like them. If I can get two different Mike Trouts in one pack, it helps add to the star content. 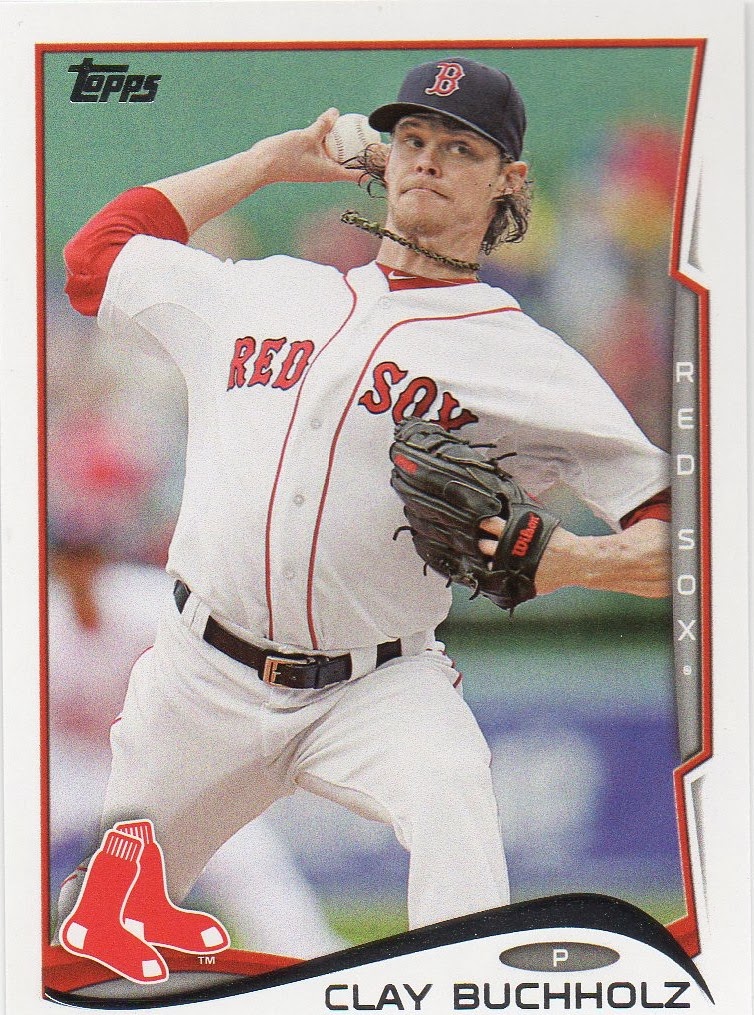 Next up came this Clay Buchholz. Hopefully we’ll get big things from Mr Buchholz this season. I guess this is as good a time as any to discuss the base card design this year. Works for me. It has the player’s name, team, and position. As usual, Topps makes the team logos as big as humanly possible to show off the fact that they can use them. One of these days Topps will stop putting the player’s name in foil. I long for the day when I can actually read the name without tilting the card 100 times to get the perfect angle. Artistically, the wave at the bottom probably contrasts with the angular design on the side. But, I’m not an artist. It’s not so obnoxious that it bothers me, so I’m happy. 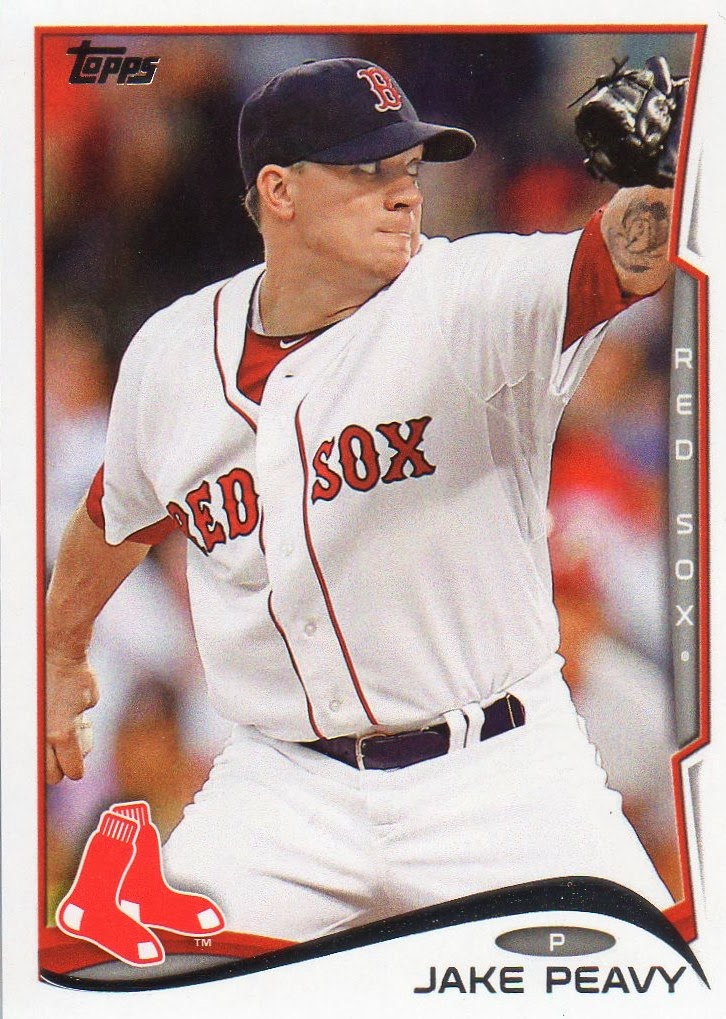 Next comes Jake Pevy and his close cropped card. Actually, lots of the cards this year seem to be tightly cropped. In this case, I think it gives a perfect look into Peavy’s intensity. It also clearly shows off the Red Sox uniform, which is great. 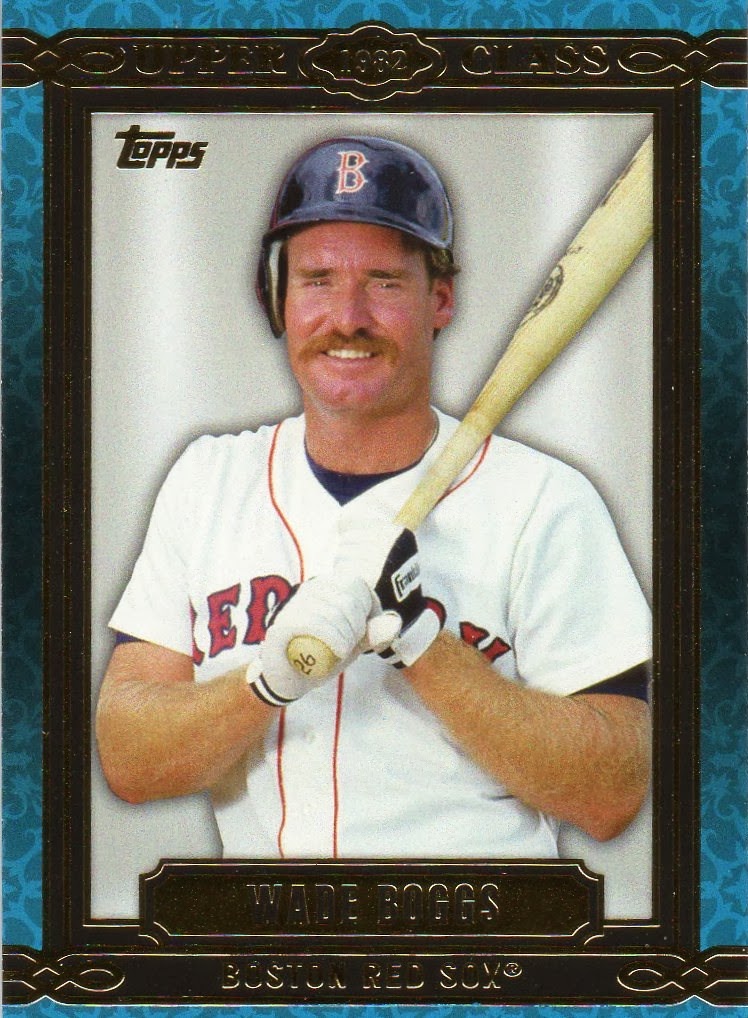 Next came this “Upper Class” insert card of Wade Boggs. This card apparently celebrates Boggs’ membership in a great 1982 rookie class. It’s a very simple portrait cart, with very little thought put into the design. It’s filler if I’ve ever seen it. 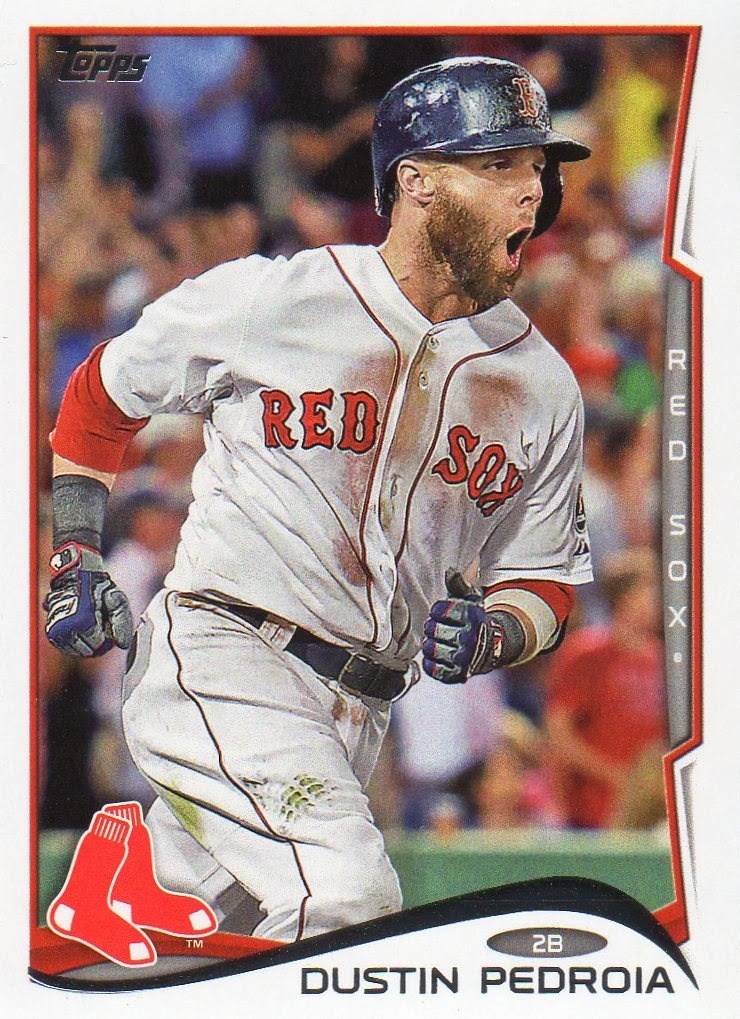 Finally we get to Dustin Pedroia. As usual, Pedroia has made sure his uniform is dirty so people will think he hustles. I wonder if he got to pick out this picture himself. Looking at the picture, something seems off. I can’t put my finger on it, but it almost looks photoshopped. The richness of the colors aren’t there. But, obviously, there’s no reason Topps would need to photoshop a Pedroia picture. Unless they added the dirt.

Overall, not a bad start to the 2014 collecting year at all. Six Red Sox cards, including two inserts, and a parallel. As always, opening the first pack of the year doesn’t help quench my thirst for Red Sox cards.

It just makes me thirstier for the rest of them.

Posted by Section 36 at 6:20 AM
Email ThisBlogThis!Share to TwitterShare to FacebookShare to Pinterest