Obviously, Ted had to be mentioned in this list somewhere, right? As the greatest player in Red Sox history, he comes to mind whenever you talk about the Sox.

As you might have guessed, my personal memories of Ted Williams are fairly limited. I’m much too young to have ever seen him play the game. By the time I noticed him, he was an elder statesman of the game. There were articles of him advising young players in Red Sox camp, or talking hitting with Wade Boggs or Tony Gwynn. The one time I was in the same park as Williams was the 1999 All Star game. 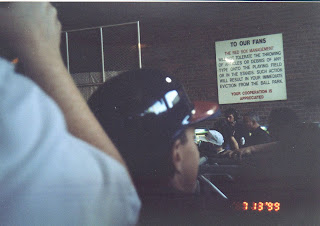 Before the game, I was sitting in my seats watching the pregame activity when someone told me to grab my camera. He said the area under the centerfield bleachers was “full” of legends. I didn’t realize it at the time, but MLB was planning on unveiling the All-Century Players during the pregame ceremony. Apparently, some of the stars came into view every once in a while. So, I grabbed my camera and joined the throng at the fence under the stands. When I got there, Reggie Jackson was wandering around a bit. At that point, there were mumblings that Ted Williams would be arriving shortly. I wasn’t about to miss that. So, I hung around in the middle of the crowd for a bit. Finally, they brought Ted in from his car. He was in the golf cart he would later use during his entrance to the ceremony. My contact with Ted was limited to watching him zoom by as I reached my camera up to try and catch a picture. Th 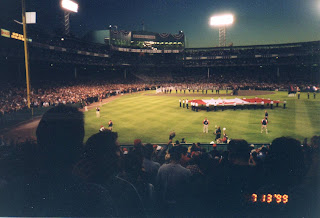 ankfully, the white cap he wore that night makes it easier to spot him.

I shouldn’t need to mention the rest of the ceremony. The greatest collection of talent ever assembled lined the baselines as they were introduced one by one. Finally, they brought out Ted Williams to a monster ovation. It was chilling. We just stood applauding until our hands hurt. Simply amazing!