Once again, I opened the mailbox and found an unexpected bubble mailer inside. It’s always quite exciting to see what wonders lie within. Just like last time, this surprise package was from Adam of Thoughts and Sox. It seems that as I post my wantlists, he’s been finding more and more cards that I need. It’s been fantastic to knock of chunks of my wants like that. What did he send over this time? Here’s a quick sample. 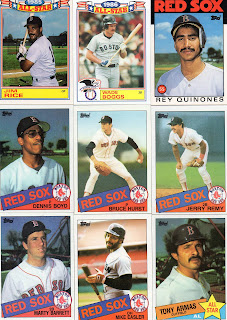 The Boggs and Rice are from commemorative all-star sets inserted into rack packs. The Boggs is from the 1987 set, and the Rice ’86. Since I didn’t buy many of these types of packs, my collection is limited. It’s always nice to add new ones. The Quinones is from the 1986 Topps Traded set. Despite the name of the set, Quinones hadn’t been traded. But, the set also included players making their ML debuts after the main set had hit the printers. That’s where Rey comes in. After three seasons in the Sox system, he got the call in 1986. The rest of the cards are from the 1985 Topps set. This is one of the first sets I remember having any quantity of. I remember buying a lot of “old” packs of 1985 Topps chasing the selecting of rookie cards including Roger Clemens, Dwight Gooden, and Mark McGwire. For some reason, though, not many of the ’85 Red Sox remain in my collection…and I never got the Clemens (or McGwire). But, this is a selection of some of the cards from that set. A young Oil Can looks out from behind some great spec’s. Bruce Hurst would have many fine years with the Sox. Jerry Remy looks to be having a pretty good time, years before he would begin his second career. The man who took Remy’s position, Marty Barrett, looks thrilled to be here. Mike Easler came off a fine year for the Sox in 1984, and was looking to do it once again. The Tony Armas is from the All-Star subset of cards. In addition to his regular issue, he appears on this card with special recognition. In the 1984 season, Armas slugged 43 home runs, and drove in 123 runs. That was a monster season. He was well deserving of the all-star nod.
As I mentioned, this was a small look at the selection Adam sent over. The rest are just as wonderful. As always, it was much appreciated.
I love surprises.
Posted by Section 36 at 9:36 AM
Email ThisBlogThis!Share to TwitterShare to FacebookShare to Pinterest
Labels: Jim Rice, Roger Clemens, Trade Partners, Wade Boggs