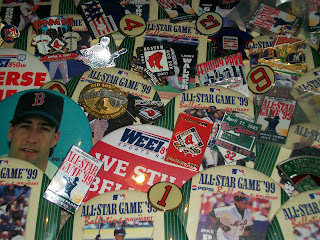 I’ve mentioned before that when I was growing up I collected pins. Every time the family went somewhere, I grabbed a pin to remember the occasion. This was great for several reasons. First, they were petty cheap. If you spent more than a couple bucks, you were extravagant. Second, they didn’t wear out. T-shirts got faded, or too small. Pins were always the right size. Pins were also absolutely everywhere. Museum shops, rest areas, sidewalk carts, you name it. They all had pins available. It made a great way to remember trips.

I carried those fine qualities onto my Red Sox collecting. Pins were great. The sold them all over Fenway, inside and out. They had some that were just about the team. Others celebrated special events. Still more focused on specific players. The variety was almost endless.

I’ve turned away form pins lately though. They started to get pretty expensive. Instead of being pocket change, they were as much as a baseball or hat. I also could never figure out what to do with them. I tried ways to store and display them, but never came up with something I liked. I tried sticking them into a corkboard for a while. That worked pretty well. They were contained, and could be hung on a wall. The only real problem was buying an attractive corkboard. I also didn’t know what to do with the pins that had backs. What did I do with the backs? I needed to keep them in case I ever wanted to wear the pin. But, that was just a pain. I tried pinning them to a piece of material. That worked pretty well, although the material never wanted to stay flat. I tried putting the material in an embroidery hoop. But, I never really liked the look. I think I’ve settled on using a replica Red Sox jersey. I can stick the pins on the front, and hang it from a coat hanger. That actually works pretty well. I also have some of the larger, less important, ones in a glass vase. It makes for an interesting little display. In the end, any sort of variety in a collection has to be a good thing. So, I appreciate the role that pins play. Does anyone else out there have a pin collection?

How do you display them?

Posted by Section 36 at 1:36 PM
Email ThisBlogThis!Share to TwitterShare to FacebookShare to Pinterest
Labels: Collecting the Sox