Not long ago, Jim of The Phillies Room posted a scorecard he kept while at a Phillies game. I thought it would be a great opportunity to look at how other people keep score. Don’t worry…I already commented on his biggest mistake: not using the correct scorecard. Here’s his card: 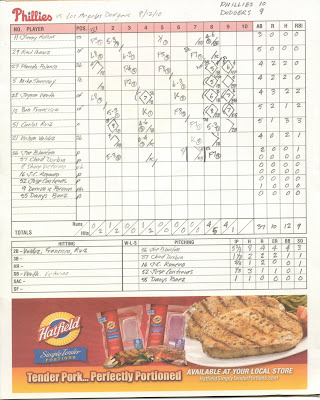 Naturally, Jim keeps score a bit differently than I do. But, that’s great. I didn’t see this game. (Why would I watch a Phillies-Dodgers game?) So, there’s only one thing I need from the scorecard. Can I figure out what happened during the game? Do I know what all the markings mean? Let’s try the first inning. Rollins lead off by popping up to the first baseman. Ibanez lined out to the center fielder. (I’ve always wondered where the cutoff was between L8 and F8) Polanco singled, and went to third when Sweeney also singled. A little first to third baserunning by Polanco. Jayson Werth then ended the inning by lining out to center. The diagonal slash, meaning the inning was over. So, it looks like a good system to me. I like the way Jim signals a run by putting the batting position of the guy who drove in the runner in the diamond. It made it easy to see that the #7 guy (Ruiz) had a big game. (I don’t like that the scorecard didn’t number the batting positions. It took me a little too long to figure out that the number seven guy was Ruiz.) I also notice that Jim has more experience scoring an NL game than I do. In the pitcher’s spot, he left all the scores in the first row. The only two times I’ve scored in an NL park, I had the score in the row of the batter. It made the scoring look a little choppy as player after player was inserted the line-up without stepping to the plate.

What in the world happened in the ninth inning? The Phillies apparently won the game by scoring four runs on a hit batter, walk, walk, error, and double. Are you kidding me?

After looking over the scorecard, I can only find a couple questions. I’m not sure what the “22” is next to the first inning. Also a few batters, Polanco especially, seem to have a “54” or “S4” in their box. Ruiz looks to have a “74” in the eighth. I can’t decide what those are for. Are they pitching changes? (A little help Jim?) Overall, a great scorecard. I thank Jim for sharing it with us. I'd invite anyone else who has a completed scorecard to scan it and send it along to me. It would be fun to check out and compare. And don't worry, I don't have to have seen the game. After all...

The scorecard shows how it happened.

Posted by Section 36 at 12:36 PM
Email ThisBlogThis!Share to TwitterShare to FacebookShare to Pinterest
Labels: I Scored