I dislike the idea of pitchers hitting. Like, “I can’t understand why anyone would like it” level of dislike. It’s not even for the usual 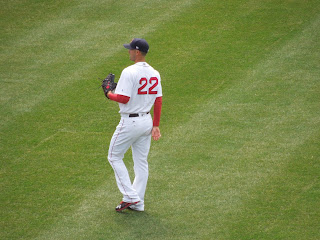 reasons, or so I imagine.

I don’t really mind that pitchers are terrible hitters. Yes, I think it’s bizarre that fans enjoy watching people do things they’re not good at. But, I make those kinds of concessions for other positions. Teams will have weak hitters in the line-up if they’re good at other things. Not to the degree of pitchers, but an elite defensive shortstop or centerfielder can find a roster spot even if they’re not hitting that much.

No, my real problem is what happened with the Red Sox last night. The Red Sox had a couple runners on with Jackie Bradley at the plate. Max Scherzer made the smart play, and intentionally walked him to bring up Rick Porcello. An American League pitcher facing one of the best pitchers in baseball was a dream match-up. And, it certainly looked like the right call after the first two strikes. Porcello looked like me up there. But, for his last strike, Porcello took another hack at it, and made contact. The ball sailed over the drawn-in outfield for a three run double. It was the key play of the game.

And it was an absolute fluke.

Porcello isn’t a good hitter. He didn’t spend months working on his hitting trying to improve his swing. Scherzer isn’t a terrible pitcher. He didn’t make a dumb pitch. It just didn’t work

That’s what I don’t like. The randomness of it. Baseball is one of the few games left where skill really does reign supreme. There’s no “shoot the puck towards the net and hope it bounces off a stick” luck needed. Your pitcher makes his best pitch, and the hitter tries his best to hit it between fielders who are trying to position themselves to catch it. It’s a chess game.

Pitchers hitting is like randomly adding an extra rook for one move.

It’s another case of skill being less important than luck. It’s a concept that’s too prevalent these days. It’s why playoffs exist, to bring more luck into winning a championship. To diminish the effects of skill and ability.

It’s why Rick Porcello had no business being at the plate last night, let alone second base. He’s the Wild card team that finishes 20 games back making it to the ALCS. It’s not competition, it’s rolling the dice.

And it helped lower the Red Sox Magic Number to 78.
Posted by Section 36 at 6:58 PM
Email ThisBlogThis!Share to TwitterShare to FacebookShare to Pinterest
Labels: Rick Porcello