It’s been a while since I’ve done one of these, so I thought it was time. This looks like a fun one too. 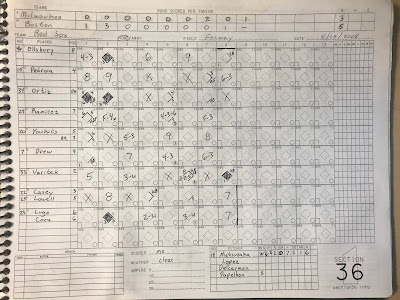 First, I probably should have gone ahead and filled in all the totals before doing this. But, honestly, I didn’t feel like it. We can still get the general idea of what was going on. Second, ignore the logo in the bottom right corner. Let’s just say I was still trying some things.

Let’s start, as we often do, in the pitchers box. Daisuke Matsuzaka got the start for the Sox. If there was ever a classic Daisuke start, this was it. He pitched into the seventh…actually a bit long for him. He struck out six. He gave up two walks and seven hits. But, he didn’t give up any earned runs, and got the win. So his 1.35 WHIP was balanced by his 8 K/9IP. Typical.

The batting order has some fun blasts from the past too. Jacoby Ellsbury was setting the table. Dustin Pedroia was coming off his ROY season, and working towards his MVP. Ortiz and Ramirez were ready to do some real damage back-to-back. The other JD was probably still living off his playoff heroics. We even see old friend Alex Cora make an appearance as a defensive replacement.

The hero of the game? Clearly it’s David Ortiz. He walked and scored a run in the first. In the second, he gave the Sox all the runs they would need with a three-run homer. The Sox scored five runs as a team…and Ortiz scored two of them, and drove in three. That’s a good day.

The goat of the day? Actually, lots of candidates. But, the nod has to go to Pedroia. He’d most likely get it just for going 0-5 in the two-hole. With Ortiz mashing the ball, a couple more baserunners in front of him would have been huge. But, Pedroia was also the only member of the starting line-up not to reach base, and he was the only one to strike out. (Wow.) That’s a pretty bad day.

But, much like the Sox in recent years, the team overcame Pedroia’s dismal performance to grab the victory. Everyone else did just enough to help the team win.

And the scorecard shows how it happened.
Posted by Section 36 at 6:10 PM
Email ThisBlogThis!Share to TwitterShare to FacebookShare to Pinterest
Labels: David Ortiz, Dustin Pedroia, I Scored