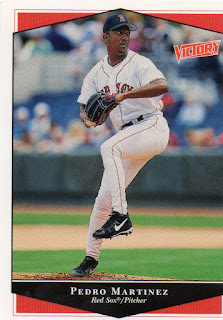 If you think I’ve talked about this card before, you’re half right. I have previously talked about the Ultimate Victory version of this card. (Although, on that version my scanner decided to include the whole card.)

Now, parallel cards are nothing revolutionary, or even anything new. For some reason, though, this set always struck me as odd. Maybe it’s the name of the set. When Topps puts out a “Topps Chrome” or “Stadium Club Chrome” set, it’s obvious to me from the name that these are a version of the regular Topps or Stadium Club set. It’s a chrome version. In this case, the two sets are “Victory” and “Ultimate Victory.” So it screams to me that they’re completely different. Although, clearly they’re not. It also doesn’t help that I knew about the Ultimate Victory before the Victory set. (I don’t remember which was actually released first.) So, I always thought of the Victory set as a scaled back version of the Ultimate Victory. Like the Topps Opening Day Set. With that feeling in the back of my mind, I always treated this set as a sort of throwaway. A stripped down version of the real set.

Other than that, the same can be said for this card that was said for its fancier brother. The picture is allowed to take up a huge portion of the card. The point at the top even allows for extra room to fit Pedro’s head. One thing that’s actually better in the Victory version is the lack of shine really allows the picture to be the focus. The geometric shapes are a clean way to add some visual appeal to the card without detracting from the card itself. It’s all really well done.

If only it wasn’t someone’s stripped down little brother.

Posted by Section 36 at 3:11 PM
Email ThisBlogThis!Share to TwitterShare to FacebookShare to Pinterest