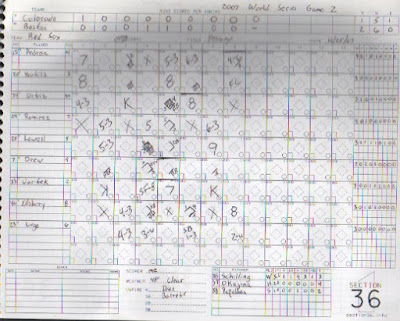 With The World Series going on at the moment, and this being the second anniversary of the most recent Red Sox championship, I thought this would be a great scorecard to look at today. Hope you agree.

What we have here is the card from Game 2 of the 2007 World Series. The 2007 championship always seems to be the forgotten championship for me. It was the curse breaking 2004 win. It wasn’t the most recent 2013 title that was won with me sitting in Fenway. It’s always been in a non-descript no-man’s land for me. That makes it a little bit more fun for me to give it another look.

And this game certainly deserves another look.

First, we see Curt Schilling is the starting pitcher, and he gave his usual solid performance. He got into a little trouble in the sixth, which required Okajimi to come in to put out the fire. But, if this had been a regular season game, it’s possible Schilling would have stayed in and gotten out of the jam himself. But, Oki did what he had been doing all postseason. Two and a third hitless innings to perfectly bridge the gap to Papelbon. Exactly like they drew it up in the clubhouse.

How about the offense? Well, they only put up two runs. Thankfully that was all they needed. The actually came from behind, which was something new. (They never trailed in the 2004 World Series, nor in Game 1 in 2007) A couple walks came all the way around to score to give the Sox the lead. The one that stands out the most is Lowell’s in the fourth. He went to third on Drew’s single in a video clip I’m sure you’ve all seen of him going full Bobby Orr into third. It was exactly the hustle the Sox needed at exactly the right time.

That move might have been enough to give Lowell the player of the game title right there. But, he also added an RBI double to drive in the other run. When you play a part in both runs in a game, and supply two of the six hits, you’re having yourself a game.

The goat? A few choices for this one, as three players went hitless. But, Varitek was able to still drive in a run, and at least Ortiz walked and scored. Julio Lugo, however, was 0-3 with a sacrifice bunt. If the only thing you did well in a game is make a productive out…that didn’t lead to a run…you’re having a bad game. I know he was at the bottom of the order for a reason, but he still wasn’t any help at all.

But, of course, that didn’t matter. The Sox pitching made the meager offense enough. The Sox took the second game of the series on their way to a four-game sweep.

And the scorecard shows how it happened.
Posted by Section 36 at 3:25 PM
Email ThisBlogThis!Share to TwitterShare to FacebookShare to Pinterest