I Always Knew I Was a Winner!

But it sure is nice to have proof.

About a month ago, the Red Sox held a little Twitter contest. The tweeted out a pic of David Ortiz, and stated that for every 34 retweets that post got, they’d give away a prize. They didn’t say what the prize was, but hey. It’s not like retweeting something takes a lot of effort, right? I’ve seen these types of contests all over Twitter. “Followers who retweet” is a popular entry method. Frankly, I don’t know if any of these follower bribes ever give away their prizes.

But, I know they gave away this one.

A couple days later, I got a DM from the Red Sox saying that if I DMed them my address, they’d send me my mini replica Fenway Park.

A replica Fenway. Not bad for a surprise prize. Then I remembered that earlier this year, the Sox gave away mini replica Fenways at a game. I wondered if that’s what they might be sending.

Then, crickets. One week went by, Then two. Then three. I started to wonder. I mean, the Sox aren’t the type of account to run a scam contest just to add followers, right? But, was there a mix-up in my address? Something go wrong on my end? I was starting to give up hope. Then, this arrived in the mailbox over the weekend. Is there a better return address to get a package from? 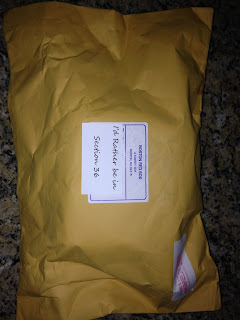 As I looked into the package, it was cleared up. It was, in fact, the SGA replica Fenway. Wonderful! I wasn’t able to make it to that game, so that was something the Red Sox room was missing. 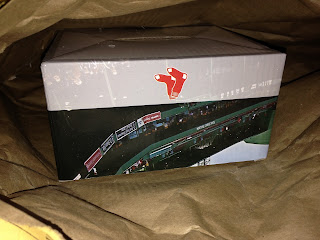 Here’s what it looks like out of the box. 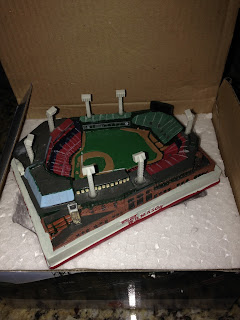 I was pleasantly surprised by the weight of it. This is a solid piece of resin, or whatever it is. It’s not some cheap piece of plastic. Even better, you can clearly see Section 36 out in centerfield!

So, a big thank you to the Red Sox for holding this contest. I know it’s probably just a way for them to get rid of some leftover inventory, and get a PR boost in the process. But, they didn’t have to do it. It’s just another way to make fans happy.

And, it proves that I’m a winner.
Posted by Section 36 at 3:12 PM
Email ThisBlogThis!Share to TwitterShare to FacebookShare to Pinterest