From a Night Owl

Not too long ago, Night Owl was complaining about his 2011 Allen & Ginter set. It was taking too long to complete the darn thing. I was ashamed to realize that I was sitting on a stack of A&G’s, and hadn’t checked his lists. I was able to find a dozen or so cards he needed, and gladly sent them his way. He was nice enough to send me something back in return. Let’s take a look at some of the package I received. 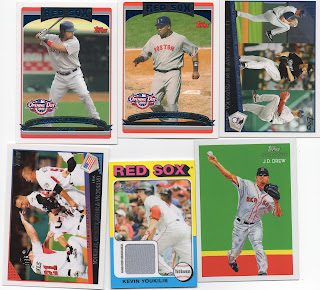 The two 2006 Opening Day cards complete my Red Sox team set. Fantastic! It never works that the last two guys you need are the two biggest stars. But, that’s the way it fell this time. The 2009 Topps Matsuzaka card is great. It’s always nice to remember that Dice-K really had a wonderful 2009 season. Probably a nice card for Phillies fans too. The Team USA card is a lot of fun. If I’m not mistaken, this is the play where Jeter tried to twist Youk’s ankle. As National Chicle cards go, the JD Drew is near the top. It’s a very nice likeness of Drew, and the background is clean. Wonderful.

Of course, I skipped over the crown jewel. The 2011 Topps Lineage ’75 mini relic. What an amazing card. I share Night Owl’s admiration of the 1975 Topps set. I think it’s the best set out there, and it is the only full set I’m currently trying to complete. A mini version of Youk would have been enough. But, the jersey just makes it incredible.

So, a hearty thank you to Night Owl for the wonderful shipment.