A few days ago, I got an early Christmas present in the mail. It was a surprise package from Jim and the Phillies Room. It contained a large stack of cards from my wantlists. The best part is that most were from sets I enjoy, but don’t have a lot of. Let’s look at a small sample of what was sent over. 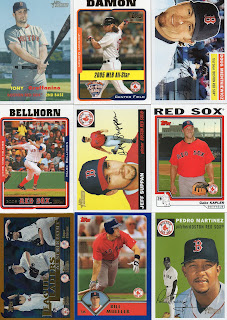 I’m not a huge fan of the design of the Tony Graffanino Topps Heritage card. When you use an older design, it can either make things look classic, or simply old. I think this design is one of the ones that just looks old. The Damon card has a nice look to it. It’s a simple design. The banner in the middle clearly shows the honor of being an all-star. It’s a nice reminder of Damon’s last years with the Red Sox before he became evil. The Meintkiewicz is an example of a “classic” old design. I like the way it looks a lot. Meintkiewicz didn’t spend much time in Boston, so the number of cards he has in a Sox uniform is limited. It’s always nice to add one to remember all he did for Red Sox nation. The same goes for Mark Bellhorn. His 2005 Topps card is a great reminder of his success in the 2004 playoffs. I can never get enough of the 2004 World Series team. Which, in a way, applies to Jeff Suppan. While he wasn’t on the Red Sox 2004 team, he is one of the reasons they won the title. Without his monumental baserunning blunder in game three…who know what would have happened. His card is another one of those classic designs that make the Heritage brands so appealing. Gabe Kapler brings even more reminder of the 2004 team. It was mentioned many times that when Damon and Kapler were in the outfield together, from the bleachers their numbers read “19 18.” The Hideo Nomo League leaders card is nice for me since it completed my team set for the year. I was probably avoiding the card because of the presence of two Yankees on the card. I’ll have to cover them up in my binder somehow. Another 2004 alum is Bill Mueller. His home run of Mariano in July is often thought of as the turning point for the season. It’s nice to remember that here…even if the design is less than stellar. The Pedro Heritage card is though. One more great looking design resurrected by the Topps Company. Any card of Pedro is a fantastic addition to any collection, and much appreciated here.
So, thanks again to Jim for the well timed package. With the trades, signings, and cards I had quite a week as a Red Sox fan. Of course, his week wasn't so bad either.
Thanks to the Phillies Room
Posted by Section 36 at 7:36 PM
Email ThisBlogThis!Share to TwitterShare to FacebookShare to Pinterest
Labels: Trade Partners