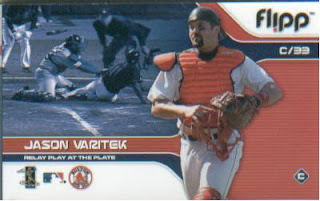 Yup. That looks like it will be the catching tandem for the 2010 Red Sox. Is that a problem? Well, yes and no.
Yes, it’s a problem. Neither of those guys is Victor Martinez. Neither of those guys will put up the numbers he did from the catcher’s spot. Heck, combined those two guys might not put up the numbers that Victor did. So, yeah, that’s a bit of a problem. But…it’s not exactly horrible. It’s different having a light-hitting catcher than, say, a light-hitting first baseman. Hardly any teams have catchers that can hit. Having one is a great bonus…but not having one isn’t putting yourself in a hole. Sort of like not having a solid fifth starter. Who does?
And, it could be good. Salty was considered good once. As I mentioned when I was talking about the Giants championship, talent often sticks around. Players who were a main part of a trade package for Mark Teixeira had some talent. He could still have some talent. It probably won’t show up as an all-star birth. But, Salty could be a solid addition to the line-up. Not great. Not an awful choice for the eighth spot though. After all, someone needs to bat at the bottom of the order, right?
The important part of this catching decision is what it now allows Theo to do. The Red Sox can go all year with Salty-Tek if that means they add Adrian Gonzalez, or Carl Crawford, or another major bat to the team. Theo has made his cost saving decision. He can’t make another one. He can’t stick his finger in any more holes in the roster. His next holes need to be filled by solid concrete.
Your move, Theo.
Posted by Section 36 at 1:11 PM
Email ThisBlogThis!Share to TwitterShare to FacebookShare to Pinterest