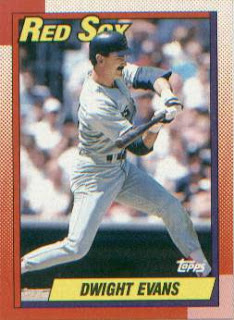 Best Picture: Dwight Evans. I’m not positive what Evans is doing in this picture. My guess is that he’s trying to check his swing. So far, he has succeeded. The grimace on his face implies extreme effort. He’s not looking anywhere near where a ball would be, so I’m guessing it’s already behind him. He’s simply giving it everything he can to save a strike.
Hall of Famers: Wade Boggs, Jim Rice
Future Hall of Famers: Roger Clemens
Reason the buy the set: Unless you’re a die-hard Randy Kutcher fan, the main draw is going to be the trio of stars. Lee Smith adds another player worthy of adding to a collection.
Overall Reaction: In 1990, Topps once again went with a bolder design. The colorful broders certainly make a statement. It’s up to you to decide if the statement is, “Yippie!” or “Run for your lives!” I see no problem with the design. I like the way everything is displayed on the front of the card. It’s a solid, but by no means spectacular, set.
Posted by Section 36 at 1:36 PM
Email ThisBlogThis!Share to TwitterShare to FacebookShare to Pinterest