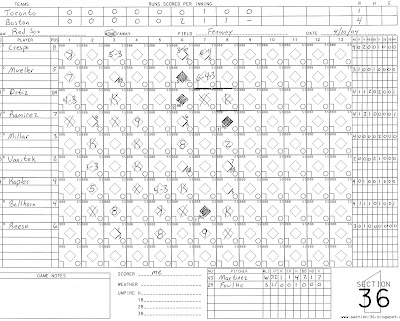 In the case of this scorecard, it would show in the line-up. Gabe Kapler got the call in right field. Pokey Reese was at shortstop. You can also see that, for some reason, Cesar Crespo was playing for Damon. I forget why Damon wasn’t playing. Another scorecard shows him leaving the game before early, and he didn’t play in the next game. So, that didn’t bode well for the Sox either.

Another thing not on the card didn’t bode well. The opposing pitcher was Roy Halladay. So, no Nixon, Nomar, or Damon and they have to face Doc. Was there anything good going on for the Sox? Yup. It’s found in the pitcher’s box. The Red Sox starting pitcher was Pedro Martinez. To start the year, some media members had demoted Pedro to co-ace, along with Schilling. Pedro needed to show us all something to prove that wasn’t the case. It looks like he did a pretty good job of that. He pitched into the eighth inning, and struck out seven batters. He had as many strikeouts as base runners. That has to be a good day. Even opposing Halladay, Pedro was able to pick up the victory. Foulke was able to show off a bit, picking up a save of more than one inning. It was pretty much exactly how the Sox drew it up.

How did the Sox score their runs? Thunder. Three home runs accounted for all the scoring. The Blue Jays run was a solo homer, so all the runs in the game scored off home runs. It’s also interesting to note that two players had two hits off Halladay. Once was Cesar Crespo. Pedro always had trouble with hitters like him. Sometimes, you make enough contact and balls fall in. The other player with two hits? Manny Ramirez. In that case, it was just Manny once again being able to hit the best pitcher’s best pitches. So, he managed two singles of Doc. Once a reliever came in? He launched the home run. Amazing.

So, the ace of the staff stayed true to form. The new closer showed exactly what he could do. The record setting offense picked up where it left off the year before, even against one of the best. The Sox bounced back from a lackluster home opener the day before. The team was well on its way to finally ending the championship drought.

And the scorecard shows how it happened.
Posted by Section 36 at 7:36 AM
Email ThisBlogThis!Share to TwitterShare to FacebookShare to Pinterest
Labels: I Scored, Manny Ramirez, Pedro Martinez