Section 36 has a new visitor! Mary Keleher is a dancer, a Red Sox fan, and the current Miss Manchester. While it's unfortunate that 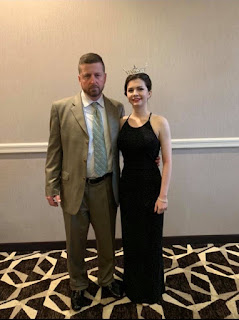 she is unable to compete for Mss New Hampshire this week due to injury, I was thrilled she was able to visit with us to discuss those topics, and a few more.

So let's see what happens when Mary Keleher visits Section 36! 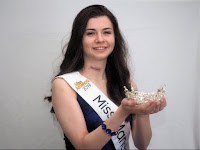 It was actually a last minute decision of mine to compete in Miss Manchester. My family and I were going to Disney for a long weekend in October, and I thought we were going the weekend of the competition so I didn’t sign up. Once I realize that I mixed the dates up I contacted the director, Sirena Lemieux, a week before the pageant and asked if she was still looking for contestants because I heard she was having trouble finding people. I especially wanted to compete for the Miss Manchester title because I was born and and lived my whole life in Manchester. And to top it all off the pageant was at my high school, and their homecoming game was that day. I credit the Crusader pride that was in the air for my win!
What did you learn about yourself at the Miss Manchester competition that would have helped you at Miss New Hampshire?
I learned that because of the Americans with Disabilities Act I am aloud to bring my fidget toy into the interview and onstage question to help with my ADHD. Interview and onstage
question are very hard because my ADHD. Imagine that your brain is like a very organized office with very efficient workers. When

you’re asked your opinion on the legalization of marijuana they go to the opinions filing cabinet and find the answer and then give the answer to the assembly line. The assembly line constructs the sentence while putting the opinion in, and out the mouth the answer goes. In my office there are piles of paper everywhere and all the words that I know have wings and fly away and go missing. The workers run around frantically trying to find the right opinion and correct words and phrases, but the conveyor belt is to fast for them. Because they have to work so fast they end up throwing whatever thought and words they can find on the conveyor belt. The act of playing with a fidget toy stimulates my brain, making my workers faster and more efficient.


How did you select your platform: Understanding ADHD?
I chose Understanding ADHD as my platform because of the lack of knowledge and understanding society has on the disorder. There are too many misconceptions about ADHD. What I want people to grasp is that this is a real medical condition that is caused by deficits of neurotransmitters in the brain.
As a talented dancer, what is your favorite part about performing on stage? 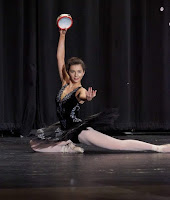 In my dance history class we have this on going joke where our answer to everything our professor asks is “Dance makes me feel alive!” because he told us not give him cliche answers like that. The reason why dancers say such cheesy things like this about performing is because it’s the truth. There’s nothing like being high off of endorphins from performing. Since I have ADHD my brain is under  stimulated, therefore this euphoria caused by performing is very good for my brain.
What is your personal fitness routine?
At the moment I have to take it easy because I am recovering from major surgery. I ruptured my C5 C6 disc and damaged my spinal cord so I had to have an emergency fusion. This means no dance for 6 months and no competing in Miss NH😔, but I still am Miss Manchester🤗. When I’m not injured my fitness routine is dancing. I don’t really think of dance as a fitness routine when I’m doing  because it is something that I love. When I practice it’s because I want to improve my technique, not the way I look.
Which Red Sox player is your favorite? Why?
My favorite Red Sox player is David Ortiz. A friend of mine had cancer when she was little and got to meet him. She met him again when she was 18 and he remembered her!
Your father is a longtime high school baseball coach. What is your favorite part about watching games at that level?
I really like seeing teenagers have a positive outlet. I also enjoy watching my dad interact with the team, I think his players really look up to him.
Former Red Sox farmhand Terry Doyle once played for your father. Do you remember anything about his time on that team?


Terry was an incredible pitcher. He was on the team in 2003 when 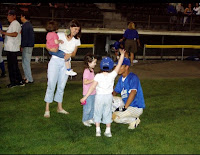 they won the state championship. I was only 5 when they won, but I will remember that day forever. Not only was Terry a great pitcher, he was an excellent role model for my little sisters and I and his fellow team mates!

What an awesome memory!

As always, I want to thank to Mary for doing this interview, and for sending along the amazing pictures. They really make the post much better.