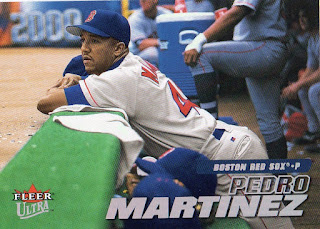 I can’t decide what to make of this card.

The whole point of Fleer Ultra is supposed to be competition for Stadium Club and its amazing photography. So, Fleer went to the full bleed design with minimal graphics. Then, they went with this picture.

You’re giving me the full bleed on the picture, but then using up most of it with the green dugout step? On purpose? Maybe I could understand it if the graphics were reversed. If they used the green dugout step as something to hide behind Pedro’s name, I could let it be. But, instead they leave that part front and center, while covering up Pedro with his name.

It’s not even Pedro being characteristically goofy in the dugout. He’s not wearing a Yoda mask, or being taped to a dugout pole. It’s about as subdued as Pedro gets when he’s sitting in the dugout. And this is what they choose to celebrate on a card meant to show off a great picture? It’s shameful.

And such a waste.
Posted by Section 36 at 3:20 PM
Email ThisBlogThis!Share to TwitterShare to FacebookShare to Pinterest