I know what you’re all thinking. What does Section 36 think of the cards? The design? The pictures? It’s been eating you up inside for weeks, right? How could you be expected to get on with your life without knowing what I thought?

Well, fear not. Just in time to enjoy the long weekend, I give you my thoughts on my very first blaster of cards!

Well, at least my thoughts on the Red Sox cards. But, you probably suspected that. 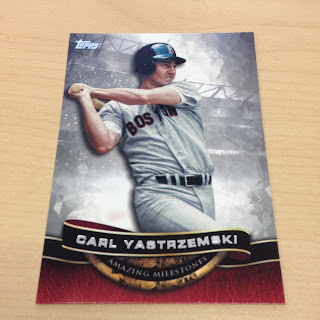 OK. “Wonderfull” is officially a stretch. I’m certainly never going to complain about getting a Yaz card to add to my collection. But, “Amazing Milestones”? I feel like we’ve been doing that for a while. I feel like we’ve been looking at this card design for a while. Not to mention that a “milestone” is something that marks a change or stage in development. This card celebrates Yaz’s 1967 Triple Crown. I suppose that’s a change from being a “non-winner” to a winner…or the stage where he now has “one” crown. But, I don’t think it really qualifies as a “milestone” the way “3000 hits” or “400 HR” would be. So, we’re basically starting off with “meh.” 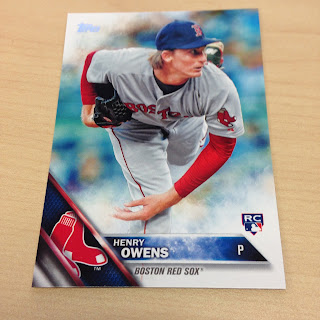 Next up we find this Henry Owens card. Now we’re talking. An honest to goodness base card! Now I can see what I’m dealing with here. First off, I forget sometimes how young Owens is. He’s been hyped for so long, that I almost consider him a bust already. But, here he is with that RC logo on his card. The rest of the card? I really like it. I like the retro 1993 Donruss feel of it. I like the clouds. Yup. I like the clouds. I like the fact that they obscure the background of the picture, but the player goes over them. As someone who’s always been a sucker when it comes to pictures extending over borders, this hit me right in the feels. Sure, it’s not giving the picture the full attention that I usually enjoy. But, it’s more of an old-time 50’s feel where they player was cut out and placed on a background. It’s almost like it’s a ’54 Topps card with clouds instead of colors. 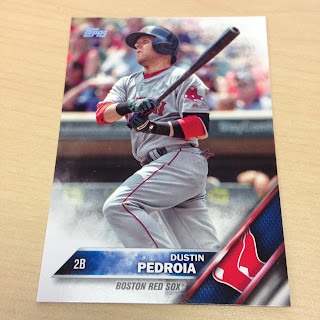 Next up was this Pedroia. I notice that the design is flipped for no apparent reason. Unfortunately, with he hanging Sox design, I think this direction is definitely a step back. I'm sure with some team logos it doesn't matter at all. But, for the Sox it does. 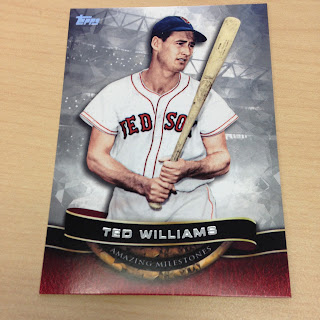 We'll wrap things up with Ted Williams. Again, never will I complain about adding a Williams card. Even in a "meh" design. I should point out again, though, that this doesn't really celebrate a milestone. It talks about Ted's .406 season in 1941. Unless you're calling it a milestone on the way to ten .400 seasons, this one doesn't really qualify. I'd almost rather they selected some obscure milestone...like 500 total bases in Yankee Stadium...than ignore the title of the subset to once again talk about Ted's 1941 season.

So, there you have it. All the Red Sox cards from the blaster. I'm excited about the design of the base cards, and can't wait to get the rest of them!

What do you think?
Posted by Section 36 at 3:24 PM
Email ThisBlogThis!Share to TwitterShare to FacebookShare to Pinterest