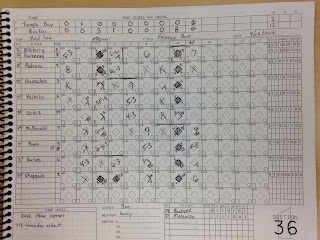 Without even looking closely at this card, I can already tell it’s going to be a good day. Just look at all those black diamonds!

But, let’s explore a little bit more before we dive into the scoring. The notes section had a couple tidbits. As might have been guessed from the early April date, this was the 2012 home opener! That always makes for a fantastic day. The notes also mention that this was the 713th consecutive home sellout for the Sox. Pretty big day indeed.

To help out with the specialness of the day, Josh Beckett took the mound, and he sure pitched a gem. Eight innings of four-hit ball. Not sure what more you could ask for there. Maybe more than a single strikeout? But, that’s splitting hairs. Melancon came it to mop up once things got really crazy.

Beckett’s performance is even more impressing when you see what happened to the Rays starter. He was only three innings on the day, giving up three runs. The Rays starter that day? Some guy named David Price. No idea why he left after only three innings. Sure, he had some trouble in the third…but he wasn’t exactly lit up. The fact that he finished the inning suggests it wasn’t an injury. Maybe it was an early season pitch count.

But, the Sox certainly took advantage of his absence. They batted around in the eighth inning, and just about everyone scored. Wow.

Who do I give the player of the game to? With so much offense, it’s tough to choose. But, look at Kelly Shoppach. 3-4, 2 2B, 3R and 2 RBI. That’s having yourself a day from the nine-spot in the order.

The goat? Well, I’d say David Ortiz since he was the only batter not to score. But, he did drive in two runs. I think I have to go with David Ross. Sure, he scored a run. But, he was the only guy who couldn’t get a hit. This was definitely a game where there wasn’t really a goat, but I have to name someone.

So, obviously, the Red Sox were able to overcome both the David Price start, and the David Ross hitless day. The bats exploded from almost start to finish, on a day when three runs would have been more than enough.

And the scorecard shows you how it happened.
Posted by Section 36 at 3:18 PM
Email ThisBlogThis!Share to TwitterShare to FacebookShare to Pinterest