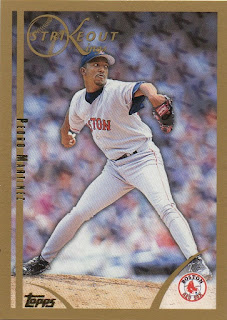 Sometimes it’s hard to know what makes one thing better than another. The iPad has rounded edges. I read that Steve Jobs did that on purpose because it made it more inviting to pick up with one hand. If you can pick it up with one hand, you sense that it’s easier to use. Makes perfect sense. I never noticed that, though, until I read about it. Sometimes the best things can’t be picked out. They can just be felt.

I look at this card and think the same thing.

On the surface, I can pick out several complaints that I usually have with cards. That Strikeout Kings logo is enormous and unnecessary. The picture it muddled with “K”s. While they makes sense considering the topic of the card, there sure are a lot of them! The name is written in foil, on the side of the card, facing to the left.

But, for whatever reason, the card just works for me in spite of all that.

The way the logo matches the border color softens the visual blow. The Ks, while everywhere, are slightly muted. Somehow, the picture is still able to rise to the occasion. If someone gave me a description of this card, I’d probably gag at all the details. But, here on the card it just works. Sometimes, like the rounded edges of an iPad, it makes a difference even if you don’t recognize it.

Sometimes you just need to go by feel.

Posted by Section 36 at 4:11 PM
Email ThisBlogThis!Share to TwitterShare to FacebookShare to Pinterest